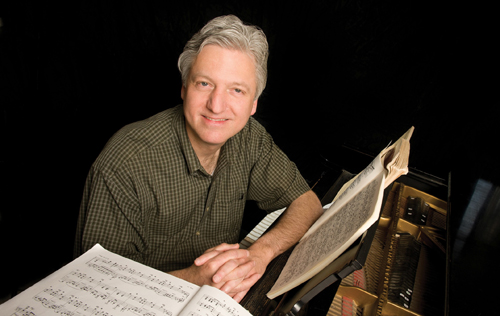 For Brian Ganz, playing Chopin is a labor of love.

In 16 hours, you could drive from any Johns Hopkins Baltimore campus to Memphis, with time to stop for lunch in Nashville along the way. You could run the New York City Marathon three and a half times. You could watch Gone with the Wind four times through, including a bathroom break or two.

Or, if you’re Brian Ganz, you could use those hours to play every piano piece Frederic Chopin ever composed—a project he has begun, though he will be spreading out the works with a few concerts each year over the next 10 years.

Ganz grew up listening to his grandfather play piano, and started playing himself at age 9. His parents, both English teachers and music lovers, exposed their children to all kinds of art, literature, and music. Chopin, though, touched him like no other, beginning a lifelong passion for the composer’s work.

An accomplished recording artist who has performed across Europe, Asia, and America, Ganz always dreamed of playing Chopin’s oeuvre in its entirety. So, when music director and National Philharmonic conductor Piotr Gajewski called him to suggest a project doing just that, he was thrilled. “It’s what I’ve been aiming for, working for, dreaming of,” Ganz says.

Most of Chopin’s works are for solo piano, but he also wrote chamber music and pieces for piano and orchestra. For the latter, Ganz will be accompanied by Gajewski and the National Philharmonic; other times, musicians will be selected to accompany Ganz as needed.

Two-thirds of the pieces he has performed previously, but with this run, he’ll be starting fresh, relearning those he already knows and getting to know the rest for the first time. The feat requires an intense practice regimen—Ganz is aiming for 15 hours of practice every week. It will be a hard task, he says, to fit in the time around teaching at both Peabody and St. Mary’s College of Maryland, where he is an artist-in-residence, and raising his 13-year-old son. But for him, Chopin is worth finding the time. He prefers practicing in the morning, when the day is fresh, but sometimes finds himself practicing in the middle of the night. “Practicing is sort of catch as catch can,” he says. “Life is quite full and it can be quite challenging to find a steady practice schedule.”

Still, Ganz and Gajewski already have their first performances under their belts. The opening concert started with the composer’s early works; the first was written when Chopin was just 7. Ganz arranged the show around an idea he calls “musical gardening”—playing an early form of a work (say, a rondo) and then playing one from later in the composer’s life—to show the extent of Chopin’s artistic development. “The early works sowed the seeds,” he says, “and the more mature ones showed the full flowering.”

At the series premiere, Ganz performed early polonaises and an early waltz and mazurka, following them with later works, such as Chopin’s Polonaise in A-flat (Heroic), op. 53, composed in 1842, when he was 32. The setup introduced audiences to the breadth of the artist’s career, his progression from child prodigy to major composer, and also helped prepare Ganz for the challenge ahead.

“There’s a lot of joy, a lot of beauty,” he says of the remaining performances. It will be a challenge but one he faces with excitement and dedication, declaring simply, “It’s a labor of love.”