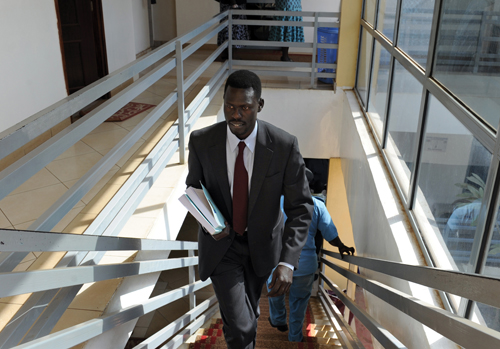 A young boy can experience few hardships greater than the loss of his family—a father and three brothers killed in a civil war. Factor in hundreds of miles traversed on foot to flee the fighting and years spent in refugee camps, and you have described the difficult early life of Abraham Akoi.

Akoi was only 11 when he was separated from his family while South Sudan was under siege during the country’s second civil war. More than 27,000 boys met similar fates. They came to be known as the “Lost Boys of Sudan,” a name bestowed on the orphaned refugees by relief organizations searching for international help. “The label reminds me of what I went through as a child,” says Akoi. Though his early life was a constant struggle, Akoi says it taught him to be strong—and even optimistic. “While we Lost Boys were deprived of parental love, care, and guidance, we organized to care for each other.” He adds, “I found great joy in shouldering responsibility for others and was very enthusiastic about life, even after spending days without anything to eat.”

In 2001, various international relief organizations relocated the Lost Boys all over the world, with about 3,800 Sudanese refugees arriving in Atlanta, Georgia. Akoi, then 21, was among them. Although a few of them had trouble assimilating, many, like Akoi, excelled. He earned undergraduate degrees in history and economics, then came to Johns Hopkins to pursue a dual master’s in government/MBA. “I knew my education was not for me alone,” says Akoi, who always had in mind the goal of returning someday to help his country.

Before that monumental vote, provisions had been made for the Lost Boys to cast their ballots from various sites in the United States. However, Akoi and many of his lost brothers chose instead to return to their homeland to cast their votes and contribute to the new government. “My dream is making South Sudan a place of hope where business can grow and people can prosper—by creating opportunities, improving public services, raising government efficiency, and enforcing law and order as well as accountability.”

In a life already full of long and difficult journeys, perhaps the most challenging of all will be from Lost Boy to founding father. Still, it is a role Akoi relishes. “I love the United States,” he says, “and it is my hope that South Sudan models itself after the USA.”