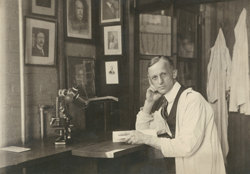 In June of 1910, Johns Hopkins Hospital admitted a 23-year-old woman after she experienced headaches, seizures, and numbness on her left side. Hopkins neurosurgeon Harvey Cushing diagnosed a tumor on the right side of her brain and decided to operate. He was well on his way to becoming a world-renowned neurosurgeon, but during the procedure Cushing could not control the patient’s bleeding. She died in the operating room. What went wrong? Was it human error? A lapse in judgment? Bad luck?

We know exactly what happened—in this case, a combination of human error and a supply oversight—because of Cushing’s frank surgical notes: “Almost every bite through the bone was followed by spurting arteries which bulged in all directions. So much wax was used [to control the bleeding] that we temporarily ran out of wax and had to send across town for some. . . . Throughout this entire performance there was a constant loss of blood and at one time the pulse had run up as high as 120. . . . At this period the operator should have desisted but the temptation to continue was too great for him.” No blame-shifting here. No couching events in inscrutable medicalese to avoid litigation.

“I don’t think it would happen today,” Alfredo Quiñones-Hinojosa, associate professor of neurosurgery at the School of Medicine, says of Cushing’s forthright and detailed notes. “Number one, we are likely more afraid of reporting errors, or number two, we are not simply working as hard as Cushing. Back then, residents lived in the hospital—it was a different time.”

Unvarnished assessments of his own performance are characteristic of the records Cushing kept throughout his career. His candor caught the attention of Katherine Latimer, a third-year student in the School of Medicine. Latimer was helping Quiñones-Hinojosa digitize Cushing’s early surgical notes, stored on microfilm in the hospital’s archive and photocopied into hard copy. The collection—which includes records for more than 800 patients from Cushing’s time at Hopkins from 1896 to 1912—afforded researchers a unique opportunity to view previously unpublished and unstudied material.

Originally tasked only with reviewing Cushing’s files and adding information to the growing database, Latimer pored over hundreds of handwritten notes, fascinated by the old surgical techniques. “I found it interesting the way that records were written back then—the script, deciphering old abbreviations,” she says. As she became more involved, Latimer was increasingly intrigued by how Cushing documented his mistakes. He had a peculiar habit of writing in third person, referring to himself as “the operator”—a means of remaining objective, Latimer thinks. He was also incredibly critical of his own performance. Latimer says, “[I found it] impressive that Cushing used awfully disparaging terms for himself, like ‘stupid’ or ‘careless.’” He acknowledged mistakes due to bad luck (“By ill luck or carelessness, the operator retracted the dura to too great an extent.”), ignorance (“The operator stupidly did not recognize that this was a new growth.”), and fatigue (“A large crowd of interested bystanders and a tired operator led to a mistaken direction of the exploration.”). Regardless of whether a patient died in the operating room or survived the surgery with no apparent complications, Cushing showed the same candor in his notes.

Latimer’s interest eventually led to a study published in the February issue of Archives of Surgery, in which Latimer and her co-authors posit that acknowledging medical errors was crucial to innovation at a time when neurosurgery was in its infancy. Latimer, principal author of the study, counters assumptions that Cushing and his contemporaries did not have to worry about lawsuits by pointing out that Cushing practiced when malpractice litigation was ramping up and surgical notes, considered more reliable than witnesses’ memories, were relied upon heavily in court cases. It was not uncommon for the successes and failures of a prominent surgeon like Cushing to be reported in The Baltimore Sun. Yet throughout his career, Cushing urged colleagues to report errors—not only to instruct fellow surgeons who could learn from others’ mistakes, but to familiarize the general public with the realities of modern surgery. “Errors will be made,” Cushing said in a 1920 address before his colleagues, “but it is from our mistakes, if we pursue them into the open instead of obscuring them, that we learn the most.”

When Cushing entered the emerging specialty of neurosurgery around 1901—“a discouraging and discouraged enterprise,” according to one researcher—30 to 50 percent of patients were not expected to survive brain surgery. By 1910, Cushing’s patient mortality rate had fallen to less than 13 percent. Latimer et al. believe his advancements were made possible, in large part, by the fact that he acknowledged his mistakes, studied them, and devised ways to avoid repeating them.