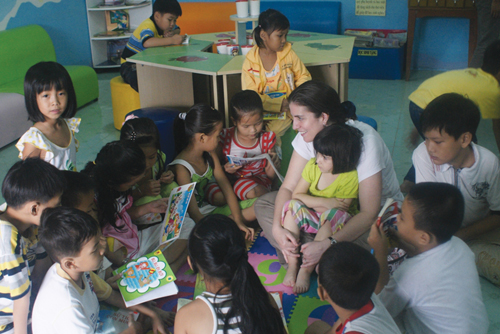 Erin Ganju traded corporate success for her dream job—increasing literacy around the world.

While so many young college graduates prepare to climb up the corporate ladder, dreaming of six-figure salaries and personal assistants, Erin Ganju jumped off. Her leap from a rung near the top landed her a dream job—teaching the world to read with the help of her nonprofit organization, Room to Read.

Room to Read brings books—and learning—to rural villages around the world, focusing on literacy and gender equality in education. In just over a decade, it has helped to establish more than a thousand schools and built or stocked over 10,000 libraries of various sizes; it has published 553 local-language children’s titles and has given more than 10,000 long-term scholarships to girls.

A native Californian, Ganju grew up in a progressive family— her mom, a social worker who had been in the Peace Corps and earlier taught English in Japan; her dad, a marketing professor. They traveled and instilled in her the importance of being engaged in and improving the world. Those values brought her first to the Homewood campus and then to the Nitze School of Advanced International Studies, where she earned degrees in international studies and economics.

Her career began as a financial analyst with Goldman Sachs in New York and then in Singapore. After a few years, she joined Unilever as an operations manager in Vietnam, then worked for two technology start-ups. But as much as she loved the country and its people, she was never satisfied. “I figured if I was going to work this hard, it should be for something I was really passionate about.”

Thus began the second chapter of her life. More than 10 years ago, she met John Wood, founder of Books for Nepal, a project that established libraries in that country. Ganju knew Vietnam, and Wood was looking to expand, so the two combined their efforts and created Room to Read. Their goal: to create a world where all children, no matter what their circumstances, have quality education to help them reach their goals. And because two-thirds of the world’s 759 million illiterate people are women and girls, the organization focuses on gender equality in education as well.

Now at the end of its first decade, Room to Read has helped improve the lives of 5 million children in 10 countries in Asia and Africa. With volunteer chapters in 53 cities around the world, Room to Read continues to increase awareness and raise funds while advancing world literacy.

From awareness come understanding and tolerance—even more important today, as technology blurs borders. Ganju celebrates the world’s cultural differences daily. “We try to really live our values of respecting diversity and supporting local initiative in everything we do at Room to Read.”