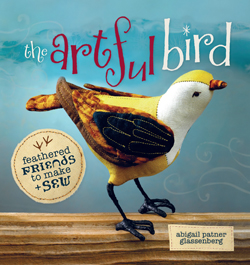 As a student, Abby Glassenberg was the girl who had all the stuff: She had thread, she had scissors, she had glue, material, glitter—anything and everything crafty and creative. She even had the sewing machine she bought in eighth grade with her bat mitzvah money. She was also the only one, she thinks, who took every art class Johns Hopkins had to offer. Glassenberg won the Eugene Leake Award for achievement in the Homewood Art Workshops (along with Kenjiro Tajima) the first year it was offered.

A history major, she became a teacher after graduation and earned a master’s degree in education from Harvard, but she never truly strayed from her artistic tendencies. About five years ago, in search of a hobby after the birth of her daughters, she began creating plush toys for kids. The toys gave her an outlet for the skills she’d harbored all her life, and opened up an online community of like-minded women with whom she could bond. But she soon found plush was not quite her style. “I have a harder-edged aesthetic,” she says. “I like things that aren’t so cute.”

And so were her bird sculptures born. Inspired in part by her husband’s interest in bird watching, and by the multitudes of shapes, sizes, colors, and personalities in the avian world, she began creating “toys for grown-ups,” little decorative birds made from wire, fabric, recycled materials, and anything Glassenberg felt would accentuate them.

The whimsical little birds became popular at craft shows. She hosted her own trunk show and contributed to other crafters’ books. Now, after two and a half years of bird making, she has her own book, released in January. The Artful Bird: Feathered Friends to Make and Sew (Interweave Press, 2010) includes 16 patterns for birds ranging from a simple wren to imaginative flamingos and colorful peacocks. They can be made with natural colors to create a realistic model, or with colorful materials and kitschy accents to create a wholly different animal.

“Each bird is like a little canvas that you can embellish and decorate and set up like an installation,” Glassenberg says of her birds, which can stand alone with the support of wire legs and innards.

Glassenberg remains loyal to her roots. She still uses the same sewing machine she bought all those years ago, and continues to actively participate in the online craft world through her blog whileshenaps.typepad.com, named for her practice of sewing and stitching while her three young daughters sleep.