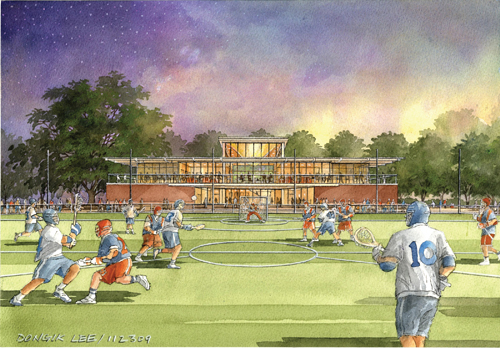 If you are a fan of Johns Hopkins lacrosse, you’ve probably grown used to buying pretzels, Italian sausage sandwiches, and sodas in the southeast end of Homewood Field. Well, prepare for a change. This summer, construction begins on the new 14,000-square-foot Cordish Lacrosse Center, which will house both men’s and women’s lacrosse programs and include locker rooms, an academic center, coaching staff offices, a training room, and a theater for watching game film and conducting team meetings and press conferences. Named after principal donor David Cordish, A&S ’60, ’69 (MLA), the new facility, first of its kind for an NCAA lacrosse program, will cost $10 million, all of it privately donated. The building is slated to open by the end of the 2012 lacrosse season. (No word yet on where the Italian sausage vendor will be stationed.)