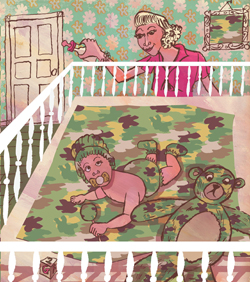 Last winter, I was walking to campus after several snowy days when everything around me was a slight modulation of gray. Suddenly, a figure popped out of the gloom. What made him stand out on this monochrome day? He was wearing camouflage. Not the seasonally appropriate arctic type that makes you look like a gun-carrying polar bear. He was a moving jungle.

That seemed odd. A fundamental principle of camouflage is that being seen is a bad career move. As we approached one another, it became clear that he was not a member of the military (and we can all sleep more soundly knowing that). The camouflage was a fashion statement.

This strange episode set me thinking about the many recent times I’d seen civilians dressed in military-looking camouflage. People who wear it professionally are often very happy when they don’t have to wear it. Why would people who don’t have to wear it do so, especially when it isn’t hiding anything? I never did answer that question (although I have my suspicions), but I learned some strange stuff about camouflage.

The most striking thing was the variety on the market. I’d always known that there are different types, depending on the environment—desert, jungle, snow, or woods—and that different countries have different patterns. (Check out the Polish Pantera Woodland Digital pattern. I had a shirt like that in the 1960s.) It was nonetheless stunning to find pink camouflage, although it could be useful if you’re using little girls or flamingos for cover.

Also impressive was the range of things to conceal with camouflage. One company offers camouflage seat covers, although they only seem to be available for pickup trucks, and they don’t offer a pattern to hide coffee stains. If there is ever a Starbucks line of seat covers, we may do business.

But I did check for diapers. They also come in camouflage. It’s unclear what camouflage diapers might be concealing and how they might be protecting it from harm, but this raises the possibility of culture wars in daycare centers. In the right-hand corner, you have tough, combat-ready toddlers in their camouflage diapers. In the left-hand corner, you have the organic milk–swilling, PBS-loving set in their smiley-faced Sesame Street diapers. (If I were Elmo and the best product placement I could get was on diapers, I would be looking for a new agent.)

By the time I got to diapers, I decided that the case was closed, although I still wasn’t sure what the case might be, except that there is a major market for camouflage for people who don’t need it. Or am I missing something?

An intriguing use for camouflage that emerged from my research had never occurred to me. It can be educational. One website’s suggested list of activities for small children included this one: “Learn the secrets of animal survival—CAMOUFLAGE! Wear camo that day and see if you can survive like the animals by playing a game and searching for hidden creatures.” It’s a promising idea, although I’d be picky about where I’d have kids do it (not in Baltimore alleys) and when I’d have them do it (not during hunting season).

Perhaps my gloomy-day guy got it right after all. There is a time to be invisible and a time to be seen. Even if it takes camouflage to do it.