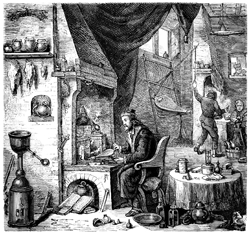 A Johns Hopkins historian has come forth to defend the honor of the lowly—and he says misunderstood—alchemical investigator. Not only did alchemists’ work have some scientific effect, says Lawrence Principe, professor of history of science in the Krieger School, but their labors contributed greatly to the development of modern chemistry. “Most of the techniques that chemists now use in labs were developed in the Middle Ages,” Principe says. “What alchemists and chemists were doing at that time was incredibly similar.”

Crystallization, distillation, sublimation—all techniques for working with substances that are still in use today—were developed by practitioners of the alchemical arts, who plied their trade from 300 B.C., when they emerged in Greek-speaking Egypt, until they were discredited and given the existential stage hook by scientific academies in Europe in the early 1700s. What laid low the quasi-discipline was a discrediting “PR campaign of sorts,” Principe says, mounted by some academies and figures of scientific authority. They equated alchemy solely with transmutation and linked it with other fraudulent practices, making it impossible for serious chemists to pursue transmutation openly. Meanwhile, “chymistry,” as it was then known, was proving increasingly valuable in making marketable substances. To make “chymists” more respectable, scientific authorities split off all activities associated with alchemy and repudiated them. “Current scholarship is only now revealing how artificial and contrived the distinction between alchemy and chymistry really was,” Principe says. Prior to alchemy’s last beaker of fame, “chymists were the comical figures in theater and literature.”

During their heyday, alchemists may not have successfully spun gold, but they created cosmetics, dyes, liquors, pharmaceuticals, and pigments. They analyzed metals, created artificial fertilizers, and tested hypotheses that proved pivotal in the development of science. “They developed a sophisticated theory of matter and of material change that responded to their direct observations of the world and their work,” adds Principe.

To test his theories that alchemists’ practice involved genuine chemistry, Principe has recreated many of their lab experiments. For example, he knew that alchemists extracted medicines from a glassy substance that they derived from antimony. So he tried to use their techniques on an antimony compound he had bought from a chemical company. “After many tries, I couldn’t get the experiment to work,” he says. “I’d get this dark, crystalline mess that was nothing like glass.” Vexed, he decided to order antimony ore from Eastern Europe, near where the original alchemical experiments took place. “It worked perfectly,” he reports. “The antimony had the tiniest impurity—about one-half of 1 percent—of quartz in it. That made all the difference.”

Other researchers have had similar troubles making alchemy work, but Principe’s research shows it can be done. “What it all illustrates is the gulf in understanding between alchemy and modern chemistry. We have to be a little bit more forgiving of the work they were doing. Alchemy’s not mumbo jumbo or a fraud. These were people who were serious investigators of nature.”

Principe laid out his myth-busting take on alchemy in February at a conference of the American Association for the Advancement of Science, and more recently in the June issue of Isis, a scholarly journal devoted to scientific history. He frequently discusses how the concept of transmutation—turning one metal into another—was based on a coherent theory about the composition of metals. Alchemists believed that all metals were compounds of the same two materials. The differences among them were due to the proportions of those two materials and their grades of purity. Thus, changing the proportions or purifying one material could change one metal into another, or so they thought. History has often made it seem as though alchemy’s emphasis on transmutation is what sank it into oblivion. But Principe notes that several prominent scientists, including Sir Isaac Newton and Robert Boyle, known as the father of modern chemistry, pursued transmutation and other aspects of alchemy.

Although some science historians began to take a second look at alchemy in the 1950s, it has become a much more popular research subject in the last decade or so. “There are many books waiting to be written and read on the subject,” Principe says. “It’s an amazing phenomenon. Everything we thought we knew about alchemy 50 years ago is being reconsidered.”