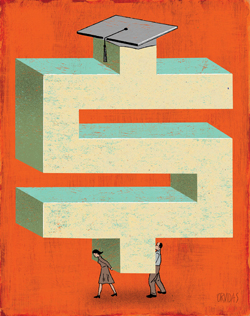 In a New York Review of Books essay covering a flurry of books critical of U.S. higher education, scholar Peter Brooks summarized the charges: “Above all, the university has become unjustifiably expensive, inaccessible, and unaccountable.” What are federal and state governments getting for their money? What are students (and parents) getting for their money? Can the current business model sustain an institution like Johns Hopkins?

These critiques and a search for new models concern Johns Hopkins provost Lloyd Minor. He believes U.S. research universities have thrived because of a vital triad: autonomy, freedom, and meritocracy. But in a recent address at the Nitze School of Advanced International Studies, Minor warned, “The temptations to compromise our principles will only become stronger as cost and budget pressures increase.” He added, “There will be powerful incentives to trade autonomy for more restrictive funding, to exchange freedom for certain forms of business and corporate support, to subvert meritocracy in order to appease political correctness.”

Minor defended each fundamental trait of the American university system. “One result of autonomy”—institutional autonomy as well as the autonomy granted to faculty and students—“is an interdisciplinary culture in American research universities that you don’t see in European universities.” Regarding freedom, he said, “Rigorous debate, the free arguing of ideas, the free sharing of discoveries—this is the foundation of the rise of democracy and the cornerstone of the scientific revolution.” As for meritocracy, the provost added, “The core value of meritocracy means that in most cases, sooner or later, the good ideas, the true discoveries, the profound insights, are irrepressible. The cream rises to the top.”

England has launched an agonizing re-examination of how and why it funds higher education. Minor notes an underlying reorientation to “a marketing mentality. Such an orientation imagines students as consumers who attend college to maximize their future earning potential.” The ever-escalating cost of higher education in the United States has prompted critics to question whether costs have outstripped future financial benefits of attending an elite school. Minor argues that the investment remains worth it. In the SAIS speech, he noted the difference in earnings between those who have college degrees and those who do not, and said, “The disparity is so great that even for students who use loans to finance all of their tuition, it takes only about 11 years to recoup that cost plus the earnings foregone while in school.”

He adds, “In my speech at SAIS, I talked about the need for research universities to defend a triad of key values, but this defense is offered in the context of the broader need to address legitimate criticisms, respond to challenges, and critically examine our performance. Autonomy, freedom, and meritocracy must be earned by a willingness to be accountable.”

When he discusses the challenges ahead, Minor cites an analysis of American universities made by Harvard Business School professor Clayton Christensen. Christensen looks at schools like Johns Hopkins and sees three incompatible business models housed within the same institution: research, teaching, and “facilitated user networks,” which at Hopkins could refer to things like hospital patient care. In a report titled “Disrupting College,” published by the Center for American Progress, Christensen said, “This has resulted in extraordinarily complex—some might say confused—institutions where there are significant coordinative overhead costs that take resources away from research and teaching.”

Where Christensen sees weakness in the three models’ cohabitation, Minor sees diverse sources of revenue at a time when there is pressure on revenue streams like tuition and federal research funding. He believes institutions like Hopkins are uniquely positioned to work on immense global challenges. “Our task and our unique contribution lie in turning information into knowledge. We will do this by bringing multiple disciplines together to take up profoundly complex issues that can be solved no other way.”