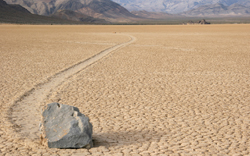 Rocks like this one can travel more than 100 yards across the floor of Death Valley.

For six decades, observers have been confounded by the movement of large rocks across a dry lake bed in California’s Death Valley National Park. Leaving flat trails behind them, rocks that weigh up to 100 pounds seemingly do Michael Jackson’s moonwalk across the valley’s sere, cracked surface, sometimes traveling more than 100 yards. Without a body of water to pick them up and move them, the rocks at Racetrack Playa, a flat space between the valley’s high cliffs, have been the subject of much speculation, including whether they have been relocated by human pranksters or space aliens. The rocks have become the desert equivalent of Midwestern crop circles.

“They really are a curiosity,” says Ralph Lorenz, a planetary scientist at the Applied Physics Laboratory. “Some [people] have mentioned UFOs. But I’ve always believed that this is something science could solve.”

It has tried. One theory holds that the rocks are blown along by powerful winds. Another posits that the wind pushes thin sheets of ice, created when the desert’s temperatures dip low enough to freeze water from a rare rainstorm, and the rocks go along for the ride. But neither theory is rock solid. Winds at the playa aren’t strong enough—some scientists believe that they’d have to be 100 miles per hour or more—to blow the rocks across the valley. And rocks subject to the “ice sailing theory” wouldn’t create trails as they moved.

Lorenz and a team of investigators believe that a combination of forces may work to rearrange Racetrack Playa’s rocks. “We saw that it would take a lot of wind to move these rocks, which are larger than you’d expect wind to move,” Lorenz explains. “That led us to this idea that ice might be picking up the rocks and floating them.” As they explained in the January issue of The American Journal of Physics, instead of moving along with wind-driven sheets of ice, the rocks may instead be lifted by the ice, making them more subject to the wind’s force. The key, Lorenz says, is that the lifting by an “ice collar” reduces friction with the ground, to the point that the wind now has enough force to move the rock. The rock moves, the ice doesn’t, and because part of the rock juts through the ice, it marks the territory it has covered.

Lorenz’s team came to its conclusion through a combination of intuition, lab work, and observation—not that the last part was easy. Watching the rocks travel is a bit like witnessing the rusting of a hubcap. Instances of movement are rare and last for only a few seconds. Lorenz’s team placed low-resolution cameras on the cliffs (which are about 30 miles from the nearest paved road) to take pictures once per hour. For the past three winters, the researchers have weathered extreme temperatures and several flat tires to measure how often the thermometer dips below freezing, how often the playa gets rain and floods, and the strength of the winds. “The measurements seem to back up our hypothesis,” he says. “Any of the theories may be true at any one time, but ice rafting may be the best explanation for the trails we’ve been seeing. We’ve seen trails like this documented in Arctic coastal areas, and the mechanism is somewhat similar. A belt of ice surrounds a boulder during high tide, picks it up, and then drops it elsewhere.”

His “ice raft theory” was also borne out by an experiment that used the ingenuity of a high school science fair. Lorenz placed a basalt pebble in a Tupperware container with water so that the pebble projected just above the surface. He then turned the container upside down in a baking tray filled with a layer of coarse sand at its base, and put the whole thing in his home freezer. The rock’s “keel” (it’s protruding part) projected downward into the sand, which simulated the cracked surface of the playa (which scientists call “Special K” because of its resemblance to cereal flakes). A gentle push or slight puff of air caused the Tupperware container to move, just as an ice raft would under the right conditions. The pebble made a trail in the soft sand. “It was primitive but effective,” Lorenz says of the experiment.

Lorenz has spent the last 20 years studying Titan, a moon of Saturn. He says that Racetrack Playa’s surface mirrors that of a dried lakebed on Titan. Observations and experiments on Earth may yield clues to that moon’s geology. “We also may get some idea of how climate affects geology—particularly as the climate changes here on Earth,” Lorenz says. “When we study other planets and their moons, we’re forced to use Occam’s razor—sometimes the simplest answer is best, which means you look to Earth for some answers. Once you get out there on Earth, you realize how strange so much of its surface is. So, you have to figure there’s weird stuff to be found on Titan as well.”

Whether that’s true or not will take much more investigation, he adds: “One day, we’ll figure all this out. For the moment, the moving rocks present a wonderful problem to study in a beautiful place.”