Tales unadorned and told from the bottom up
June 1, 2011 |  by Michael Anft 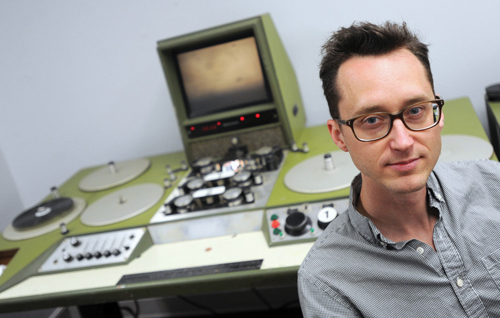 Filmmaker Matthew Porterfield’s unvarnished view of working people focuses not on the loopy absurdity of their behavior but on the weight they bear as they move through their lives. Photo: Steve Ruark

It’s a dreary day in one of Baltimore’s trendier neighborhoods. A young man with a gaunt face and big glasses sits at an unsteady table in a mid-scale hipster hash house. He picks at his late lunch of steak and Brussels sprouts and spies on a middle-aged couple seated on a public bench out front. The woman, for reasons no one seems to know, is taking a pair of scissors to the man’s patchy locks. The setup—folks who look down on their luck acting out an unselfconscious display of public grooming—seems lifted straight from the oeuvre of John Waters.

As he draws his gaze away from the window, the spy—filmmaker Matthew Porterfield, no stranger to the edgy marriage of Baltimore streets and cinema—gives a hint of a smile. “We engage in a kind of voyeurism when we make or watch movies,” he says. “I like to draw attention to that in my films.”

A comparison between Porterfield, a lecturer in Film and Media Studies at the Krieger School, and the celebrated Baltimore auteur Waters, who is a fan and supporter, seems natural enough. They each work the same surface of the street, parsing its grit for texture. But Porterfield’s spare, melancholy cinema, on display in his new film, Putty Hill, will never be confused with the campy spark of Waters’ work.

In Putty Hill, released early this year to rave reviews in The New York Times and elsewhere, Porterfield and his actors starkly sketch out the world of a group of friends and relatives who survive a 24-year-old addict felled by an overdose. The characters range from an ex-con tattoo artist to a gaggle of teenage girls, set in various places where urban and suburban life overlap. Porterfield favors untrained actors who speak for themselves, improvising from the director’s rough sketches of scenes. “I like the combination of vérité and acting,” he says. “There’s this idea that you may be able to approach some objective truth with a camera. It’s hard to get that from people who are trained in drama. They get lost in how they’re doing their craft.”

Porterfield himself plays an off-camera interviewer who asks characters questions about the addict, Cory, and about their lives. By doing so, he says, he wants to break down the narrative wall between auteur and audience that allows viewers to suspend their disbelief—and makes so much Hollywood fare predictable and empty. What emerges are acute portrayals of what are euphemistically called “working people”—though some of them, as in the real world, don’t have jobs. “It plays both as documentary realism and as fiction,” says Porterfield. “There’s a lot of interest now in films that walk that line, that are an amalgam of those two styles.”

Part of Porterfield’s M.O. grows out of his dissatisfaction with how people are represented on celluloid. Movies such as the Oscar-nominated Winter’s Bone, shot in the Ozarks last year by New York filmmakers, used clichéd characters to tell a story—in this case, “inbred meth-heads with missing teeth,” says Porterfield. “It’s a form of exploitation. I’ve seen a lot of films that portray people without taking responsibility for the ramifications of perpetuating a stereotype. There are some hillbillies in my background, so maybe I’m more sensitive to it.” His sensitivity hasn’t been lost on critics, who have showered him with praise. “The list of American movies that depict working-class life with this much understanding and this little condescension is very short,” Andrew O’Hehir wrote at Salon.com, adding that Putty Hill “offers American independent film a new way forward.”

Porterfield, 33, started teaching at Johns Hopkins in 2007, right around the time he received raves for Hamilton, his first feature film. Hamilton chronicled the lives of young people in the tidy working-class neighborhood in northeast Baltimore where he grew up and still lives with his parents. (His father, Gordon Porterfield, a playwright and teacher, is an instructor in the School of Education.) Struck by the stark differences between the lives and viewpoints of his neighbors and the up-market kids he attended private school with 13 miles away, Porterfield began to take a longer look at the people on his hilly street, with its eclectic mix of races and brick, clapboard, and wood-frame houses.

That long gaze shows up in the languorous camera shots and an often muted, detached style that marks Putty Hill. The film soaks up shadows and painted surfaces. “In every location, we wanted to honor the naturalism of the scene,” Porterfield explains, with a nod to his cinemato-grapher, Jeremy Saulnier. “When we saw a scene was dark, we wanted to use what little light there was to create a mood with it.” It’s impossible not to be moved by the mix of foreboding and serenity in scenes of the disheveled hovel where Cory, the dead addict, holed up during his last days.

Putty Hill cost $80,000 to make, put together with the help of a half-dozen Johns Hopkins students. Porterfield sees moving students from the classroom into the real world as part of his mission. There is a world full of stories out there, he says, as well as the chance to develop a meaningful camaraderie with those who tell them. He cites that as key to his art and his life. “As I was making this film, I was pretty melancholy, which I think comes through in it,” he says, adding that he was drinking too much to salve wounds inflicted by a failing marriage. “One of the things that saved me was doing this film. The collaborative process feeds me. I don’t think I would have found my way out of a hard time in the same way if it wasn’t for it.”