The poetic subversion of capitalism
June 1, 2011 |  by Darcy Courteau 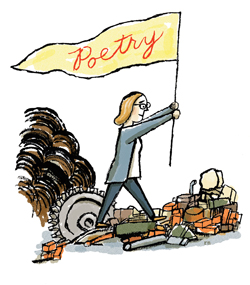 Christopher Nealon’s aha! moment came when, thumbing again through books by contemporary American poets, he realized that they all contained writing about capitalism. Adrienne Rich worried that capitalism had corrupted feminism. Amiri Baraka wondered if black Americans should even try to get ahead in a system that had so thoroughly exploited them. And back-to-the-lander Wendell Berry took a man-of-action approach, providing a chore schedule for readers ready to put modern economics out to pasture: “So, friends, every day do something / that won’t compute. Love the Lord. / Love the world. Work for nothing.”

Nealon, an associate professor of English in the Krieger School and a poet himself, isn’t the first to discern in the output of America’s poets a decidedly anti-capitalist bent. There’s a long tradition that holds that lucre and lyrics don’t mix, and neither do art and politics. But in The Matter of Capital: Poetry and Crisis in the American Century (Harvard University Press, 2011), Nealon shows how poets preoccupied with capitalism have gotten away with pissed-off political commentary by adopting a conversational tone that mixes in perfectly everyday, even mundane observations. In fact, the poets who pioneered this method are among the most vaunted—the modern poetry godfathers Ezra Pound and W. H. Auden. In one of his cantos, Pound condemned an economic system that pays workers less than the value of their labor, using a factory’s operation as an example: “It pays workers, pays for material. / What it pays in wages and dividends / stays fluid, as power to buy, and this power is less, / per forza, damn blast your intellex, is less / than the total payments made by the factory.”

As Pound knocked the corners off his pedagogy with colloquialisms and asides, Auden mixed his anti-government indictments with schoolboy slang, his language and cadence becoming increasingly campy as catastrophe approaches. Of job-seekers’ chaotic passages, he writes: “And self-respect drives Negroes from / The one-crop and race-hating delta / To northern cities helter-skelter; /And in jalopies there migrates /A rootless tribe from windblown states . . .”

This telling big ideas with unexalted language has provided poets the camouflage, Nealon argues, to counter the crises for which he blames modern economic systems: social breakdown, environmental degradation, war-mongering among nations in competition for resources. Far from simply producing pretty aesthetic objects, these poets have used art to speak out without taking too much heat. Bay Area poet and 1960s queer subculture hero Jack Spicer saw language as a Trojan horse that could sneak in otherwise foreign ideas to audiences that “never knew what hit them.” For Spicer, poetry was a frontier “somebody could hide in with a sheriff’s posse after him.” Anxious about a society that preferred he feed coins to a jukebox rather than sing songs with his friends, and connecting mass culture with mass violence, Spicer believed that performing poetry in small groups was one way to maintain a sense of community while rebelling against a homogenized culture.

It is the very insignificance of poems that most people don’t care about, enjoyed by bands of misfits reading to each other, that makes them perfect vehicles of subversion, Nealon argues. “Poetry is the cockroach of the arts,” he says. Its “cheap, reproducible” textual form, composed only with pen and ink, helps it outlast the physical destruction that capitalism wreaks. Poems can’t be bombed to bits in wartime. And their lowly nature helps them resist, as much as is possible amid any economic system, becoming commodities—unlike precious works of art that can give pleasure only to those with enough money to purchase access to them.

Nealon found research for The Matter of Capital engaging enough that he began studying economic theory, but he still writes poetry. Like his idol Jack Spicer, he is fascinated by catastrophes—he cites the recent economic crisis—and casts about for unlikely heroes. In one recent poem, he writes, “In my apocalypse it’s teenage girls, they save the world a lot. / Wide open eyes and averted glances – / they can see what’s coming forming, how excellent is that?”

Is there any hero more unexpected than an adolescent girl? For Nealon, who has devoted himself to exploring poetry’s subversive side, that’s, like, totally the point.