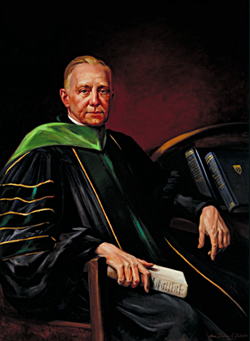 An infectious disease specialist and dean of the School of Medicine for 24 years, Alan Chesney also wrote the first history of the medical school and hospital. (It was his mentee, Thomas Turner, who possessed the fundraising skills and diplomacy that brought the schools of medicine, nursing, and public health together with the hospital to archive their collective history—now called the Alan Mason Chesney Medical Archives.) From 1943 to 1963, Chesney compiled his three-volume history, which is a timeline of the Johns Hopkins Hospital and School of Medicine from 1867 to 1914. “Some historians have criticized it as essentially just a chronology, but those of us in the Medical Archives appreciate it tremendously,” Nancy McCall says. “In fact, the three volumes that we have are just getting shabbier and shabbier from use.”

There’s absolutely nothing shabby about Ann Didusch Schuler’s portrait of Chesney, in which he looks dignified and learned, staring back at the viewer with a soothing confidence. When the Baltimore artist painted him in 1975, she was more than a little familiar with the university and hospital. Her father and brother had studied medical illustration with Max Brödel, and she studied painting at the Maryland Institute College of Art under Jacques Maroger, a French émigré who in the 1950s painted a few portraits that now reside in the Medical Archives. Schuler and her husband, former MICA director Hans Schuler, broke away from the art college in the 1950s as postwar abstraction invaded American art. In 1959 they started the Schuler School of Fine Arts, a traditional atelier where they taught the techniques and materials of Western art’s old masters. Her last portrait for the collection, of orthopedic surgeon David S. Hungerford, was added in 2003; she died in 2010.