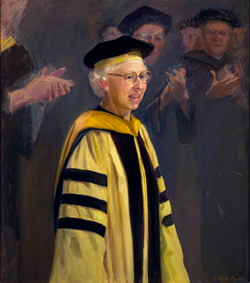 With a career at the School of Hygiene and Public Health (as the Bloomberg School of Public Health was known prior to its 2001 name change) that spanned six decades, it seems fitting that occupational health and industrial hygiene pioneer Anna Baetjer would be painted by a member of an artistic family whose relationship with their profession was similarly devoted. Baetjer, who in the 1960s established one of the first research programs in environmental toxicology, was painted by Cedric Egeli, whose father established a modest portrait dynasty. Bjorn Peter Egeli immigrated to the United States from Norway in 1915 at the age of 15, entering the Corcoran College of Art and Design in 1925 and eventually taking up portraiture. He painted portraits for 55 years—including presidents Dwight Eisenhower and Richard Nixon—and all five of his children became portrait artists. Two of his sons, Cedric and Peter, have multiple portraits in the Johns Hopkins portrait collection, and Peter’s daughter Lisa has also contributed to the collection. Here, Cedric Egeli captures Baetjer in Johns Hopkins’ sable and gold academic colors on the occasion of the university awarding her an honorary doctorate in 1979.