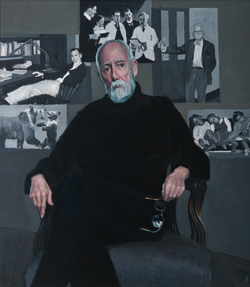 The most striking thing about Judy Taylor’s portrait of Barton Childs, a pediatrician and geneticist who died in 2010, isn’t just how dramatically different it is from other portraits in the collection but how unique it appears even in the context of Taylor’s work. A talented if conventional painter of colorful landscapes, still lifes, and portraits, Taylor turned for this painting to an almost Lucian Freudian palette of matte grays, black, and white, with a subtle, peachy pink animating her subject’s face and hands. Childs sits in a chair with his legs crossed, his entire frame encased in black pants and turtleneck. He holds his eyeglasses in his left hand, as if he just took them off to give somebody a measured glance. Behind him are images of photographs that Taylor included to tell a story of his life, including one of three young girls in a waiting room of the Johns Hopkins Harriet Lane Clinic, where Childs worked, and another of a mother bear with her cub, one of many photos of animals and their young he had clipped from magazines to decorate his office walls.

“He was an extremely modest man, and really declined to have this portrait done until, finally, in the very last years of his life, he agreed,” McCall says. “And when it was first delivered here we were stunned because here is this large portrait and in the center is Barton Childs with a beard—and we had never seen him with a beard. It was unveiled and presented at the biennial this year, and it was just amazingly striking.”