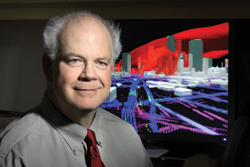 Sitting at his desk, Joshua Epstein readies a computer disaster simulation, benignly christened the “toy playground, agent-based model.” Graphically speaking, this particular computer scenario is pure Commodore 64. The playground is a green box. Inside, mostly blue dots (healthy kids) and a couple of red ones (sick kids) swirl around. Then, with the click of a mouse, Epstein unleashes a merciless flu epidemic. Soon, the kids begin to bump into each other. Blues turn red and then get placed in another square, representing an infirmary or morgue. The playground empties in seconds and all that’s left is red dots. Well, almost. “We are rooting for this one blue kid to stay healthy,” says Epstein, pointing at his monitor. “But he never makes it.”

Epstein, a former Brookings Institution senior fellow dubbed “Dr. Sim” by Forbes magazine, employs a dry brand of humor that serves the School of Medicine professor well in his chosen profession. His job is to conjure nightmare scenarios and play them out in the cyber realm—man-made and natural disasters such as a flu pandemic, earthquake, massive chemical spill, radioactive explosion, airborne toxin release, or tsunami. Virtually speaking, Epstein regularly sees people die—or be saved—by the millions.

Summer 2010, he launched the Johns Hopkins University Center for Advanced Modeling in the Social, Behavioral, and Health Sciences, or CAM, located on the university’s Mount Washington campus. The interdisciplinary center has already attracted a wealth of renowned experts to its team, including Nobel laureates Thomas Schelling and George Akerlof, in the fields of infectious disease modeling, computer science, economics, civil engineering, epidemiology, emergency medicine, and other disciplines.

The key, he says, is the center’s use of agent-based simulation modeling, which creates realistic virtual worlds populated by “agents” programmed to act like real people—they show fear, bias, competence levels, you name it. They go about their routine business until Epstein and his team inject a real or imagined threat. The agents then simulate individual human actions and multiple interactions. Say the local news reports an anthrax scare. Does one stay home from work? Flee? Ignore it? The agents will make such choices. “They do the natural or weird things human do,” says Epstein, the center’s director. “They imitate. They have bad information. They interpret things with predispositions. They change their itinerary in plausible ways.”

To demonstrate the full breadth of the center’s capability, Epstein runs another scenario, one of his favorites: an airborne toxin release over Los Angeles. (The native New Yorker playfully uses L.A. in several disaster scenarios.) In this case, a nifty 3-D simulation depicts a slow-moving red plume that drifts across the city based on known wind patterns, fluid dynamics, atmospheric chemistry, and other factors. Highway traffic, modeling up-to-date transportation and population data, drives across a landscape replicated right down to the spires on top of skyscrapers. Color-coded by speed, the traffic patterns show that as more people evacuate the city, traffic throughout the metro area becomes gridlocked. Instead of complying with public emergency instructions to take shelter, Epstein says, the agents risk exposure in droves. “They go, ‘No way, I’m going to get my kids at school across town,’” he says. “You don’t want them to drive through the plume, but they are not likely to comply [with public safety instructions] if they don’t think their kids are taken care of.” CAM plays what-if games to see what cost-effective and practical strategies and interventions could be used to save lives. What if more shelters were in place? What if air traffic were restricted? What if there were more or different evacuation routes? What if medical surge capacity were increased?

These simulations can be applied to events on any scale, from a chemical release at a hospital to a global disease outbreak. The center’s planetary-scale agent model—a first-of-its-kind project led by Jon Parker, CAM’s senior software engineer—simulates 6.5 billion distinct individuals on a planetary map. This model was used by the National Institutes of Health to plan for emerging pathogens, including last year’s H1N1 pandemic, and has been featured in Nature. The next generation of scenarios developed by the center will feature even more sophisticated modeling, with real-time streaming and biomechanically realistic software individuals to better simulate injuries, as in the event of a stampede at a sports stadium.