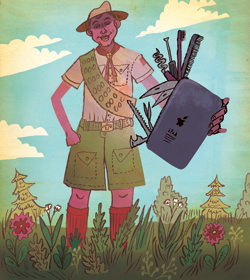 Green pigs steal eggs from a bunch of birds. These are birds with an attitude—and a taste for revenge. The birds’ mission, and yours, is to trash the pigs’ castles. Such “challenging physics-based castle demolition” is no simple matter. It “requires logic, skill, and brute force to crush the enemy.”

Some of you may be thinking, “I’ve had nights like that.” The story, however, is no figment of a fevered imagination—at least not mine. It’s a game, Angry Birds, a best-seller for portable electronic devices in the United States and over 60 other countries, including ones like Israel and Saudi Arabia that don’t agree on much else.

That tidbit of information emerged after the recent purchase of a touch-screen tablet computer dragged me into the strange world of apps—little programs you download to turn your portable device into an electronic Swiss Army knife. Some apps are helpful, like ones showing where you are and why you shouldn’t be there. Others are great for pretending to be doing something useful. (Check out Nauru on Google Earth.) Many just transform a pricey piece of hardware into the virtual version of a yappy little dog with a vast repertoire of dumb tricks.

My survey of apps wasn’t exhaustive. The online store for my device claims 90,000 of them, although it’s hard to imagine 90,000 things worth doing. Faced with that daunting number, I did random sampling, dropped usefulness as a criterion, and went for the darker side. Read on if you are considering buying anything with a name beginning with a lowercase i or e. If you are not considering such a purchase, what follows may confirm your prejudices.

Some apps were curiously defective. Horrible London, for example, features “gory stories, haunted houses, unsolved crimes, and creepy crypts.” But no catalog of London’s horrors has credibility without Heathrow on the list.

The descriptions of other apps were in an alternative form of English. The title, The Dream Log, is straightforward. It logs dreams. After that, though, the going gets rough. It has “six Cimmerian vistas” and “chimes to help you gently transition out of hypnogogia. . . .” Another nifty feature: “Should you choose to transcribe oneironautical experiences or other entoptic phenomena, The Dream Log includes the Antiketherian Signaling Timepiece.” If that makes sense, be careful about sharing your dreams.

Games account for many of the 90,000 apps, including violent ones, but some are sweet in a nutty way. I was touched by Bok Choy Boy, whose international career breakthrough came as vending machine toys. They have since branched out with a game featuring Little Orphan Susan, a candidate for The Dream Log. She is in peril because her “dreams have been invaded by meanie Numbskullz. . . . You and Susan’s dream guardians, the Bok Choy Boys, must defend her dreams and reunite her with her lost family before it’s too late!” Its creators call it a “beautifully rendered, epic battle between good and evil.”

In a lower circle of app hell were ones satisfying a primal human urge to be obnoxious. Hence, Mosquito Ringer HD. It enables your electronic device to emit “tons of tones that are extremely annoying.” It provides a wide range of frequencies to ensure that no one escapes, including family pets and men. Lest you doubt its scientific credentials, Mosquito Ringer HD emits “the same frequencies that are used by police for riot control.” (This weapon must not fall into the hands of adolescent boys.)

Research transforms the researcher. I emerged from app world wanting a shower, but not empty-handed. Thanks to extraordinary restraint, I only downloaded 33 new apps—a paltry fraction of 90,000—and they are uniformly sensible, useful, and, above all, cool. They include none of the above. (Mosquito Ringer HD remains under consideration as a meeting-shortener.)

My research yielded three conclusions. First, app world is a weird place. Second, for designers of some apps, therapy is indicated. And third, the most valuable app for many of us (including me) would deny entry to app stores.