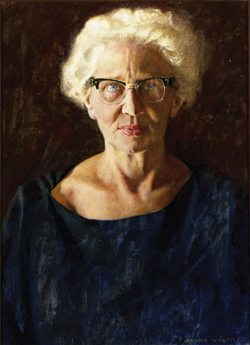 According to Nancy McCall, Helen Taussig didn’t appreciate this portrait by now revered painter Jamie Wyeth—perhaps because it reminded her of a difficult moment in her life. Taussig spent nearly four decades working in pediatric cardiology at Johns Hopkins Hospital and more than 50 years teaching in the School of Medicine, where, in 1959, she was only the second woman to be named a full professor. When she retired from the hospital in 1963, the pediatric cardiology faculty and fellows commissioned her portrait. They wanted Andrew Wyeth, whom Taussig knew through a colleague. He wasn’t available, but he recommended his teenage son, Jamie. “Pediatric cardiology was not a wealthy department,” McCall says. “And [Andrew Wyeth] said that Jamie was coming along very well. And, of course, Jamie’s price was right, so the fellows commissioned Jamie.”

The sitting was to take place over a summer weekend on Cape Cod, where the Wyeths and Taussig’s family had vacation homes. The week before, though, had been difficult for Taussig. Her department was closing the fiscal year with deficits. One of her former patients, a teenager whom she had treated since infancy, was hospitalized and died. “So having to contend with all that, she then drove, late into the night, by herself, clear up to Cape Cod, and was sitting in front of this teenager in the morning,” McCall says. “It’s an extraordinary portrait, very stark, and I think there’s probably a great deal of verisimilitude to what she looked like after that week.”