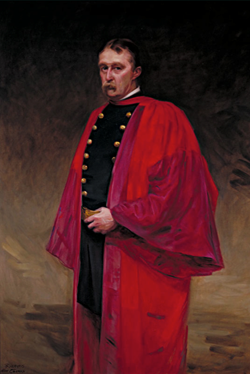 Surgeon, librarian, and hospital planner John Shaw Billings was a 19th-century renaissance man who did everything from serve as a Union army battlefield surgeon during the Civil War to help unite New York City’s libraries into the New York Public Library. In 1876 he was one of five men asked by the Johns Hopkins Hospital Foundation to submit design plans for the as-yet-unbuilt hospital. His plans were selected, and he oversaw construction alongside the Boston architectural firm Cabot and Chandler and Baltimore architect John R. Niernsée.

The portrait that hangs in the rotunda of the hospital administrative building (called the Billings Administration Building since the 1970s) is not an original, however. It’s a copy of the 1895 painting by well-known portraitist Cecilia Beaux that hangs in the National Library of Medicine, which Billings helped create. Hospital administration wanted to have a copy made for the 1989 centennial of the Johns Hopkins Hospital, and a young painter, Bradley Stevens, was contacted through the Corcoran College of Art and Design. “It’s a stunning, wonderful copy,” Nancy McCall says. “It has a life of its own. Some copyists, you can usually tell there’s something missing. This is just gorgeous. And that young artist who began his life as a copyist has been doing some other portraits.” In recent years, Stevens has done the portraits for former hospital and School of Medicine president Robert Heyssel and neurologist Peter Kaplan.