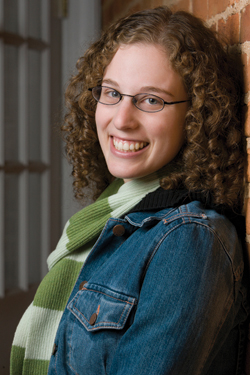 “Children’s lit is thought of as junior varsity,” says author Elissa Weissman, “but I think it’s the best thing out there.”

Don’t let the boy wizard fool you. There may be surefire paths to riches out there, but writing for kids certainly isn’t one of them. “It’s not a get-rich-quick scheme,” says Elissa Weissman, a 27-year-old Writing Seminars alumna, dryly. With three published children’s books to her name and a fourth in progress, Weissman is in a good position to know. She and her husband, Grant Roch, Engr ’04, live in a simple Baltimore row house with their baby daughter, Karina. Still, Weissman says the life of a kid lit writer offers distinct advantages.

Roch works for Constellation Energy as a qualitative analyst; while not working on her next book, Weissman teaches aspiring authors how to write children’s literature through the Johns Hopkins Odyssey program and at the University of Baltimore. For four summers in a row, she has also worked at the Center for Talented Youth, instructing precocious fourth- and fifth-graders in a writing and reading workshop.

It was through that program that she got the idea for her third book, Nerd Camp, published by Simon & Schuster earlier this year. “It was the first day and during break all these 10-year-olds who had never met were sitting around not knowing what to say until suddenly someone asks, ‘How many digits of pi do you know?’ and then they all started talking,” recalls Weissman. She discreetly moved the conversation on to another topic lest she be given a similar grilling—she’s pretty sure she knows four—but made a writer’s decision to store the moment away for future use. She subsequently employed it in Nerd Camp, whose hero, Gabe, is both thrilled and slightly mortified to have the opportunity to attend a six-week sleepaway camp known as “Smart Camp for Geeks and Eggheads.”

Weissman’s second book, The Trouble with Mark Hopper, was called “frothy and fun” by Booklist magazine. She wrote her first book, Standing for Socks, to fulfill the requirements of a two-semester Long Works class taught by Stephen Dixon and Tristan Davies in the Writing Seminars program. Though her classmates were all writing adult literature, they were immensely supportive of her work, says Weissman, recalling how Davies in particular moved from being skeptical to supportive and eventually even put her in touch with the literary agent who took her on as a client. But she has found that not all readers share her respect for the children’s genre. “I do get asked a lot, ‘Do you plan to write for adults?’ as if this is a steppingstone.”

But children’s lit seems to be the thing that she just naturally tends toward. “In the Writing Seminars program, even when I would write a story that I thought was for adults, the other students would read it and say, ‘Kids would love that.’” In the end she decided to play to her talents. “The age I write for is 8 to 12, which is the golden age of reading,” she says. “This is when kids can get really hooked on books and are building their reading stamina.” Weissman says that at a similar age she read every single book in the Baby-Sitters Club series, “and there must be hundreds of them.”

Which leads to those distinct advantages of writing for preteens. Weissman explains that those include “long shelf life” (parents love to read books to their kids that they loved as a child) and especially, for her, the chance to visit schools and classrooms. “What’s cool is unlike adult book signings where you read your work and then answer maybe three questions, with kids every single hand goes up—and they ask really great questions.” Not long ago she paid a surprise visit to Baltimore City’s Pitts Ashburton Elementary School, whose fourth-graders had been reading her book. “When I walked in the room there was screaming and kids were literally falling out of their chairs they were so excited to meet the author of a book they’d read.” For some of the kids, it was the first book they’d ever read. And that brings a special meaning to her work. “Children’s lit is thought of as junior varsity,” says Weissman, “but I think it’s the best thing out there.”