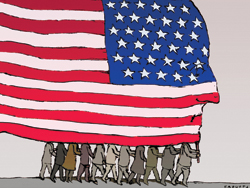 Michael Mandelbaum and Thomas Friedman know that America is in trouble. There’s the ongoing war on terror that has cost more than $1 trillion and thousands of casualties. There’s the steady reliance on foreign oil that has curbed alternative energy innovation. And there’s an enduring recession that has produced a rising national debt and unemployment rates not seen since Ronald Reagan’s first term.

Mandelbaum, director of the American Foreign Policy Program at the Nitze School of Advanced International Studies, and Friedman, the foreign affairs columnist for the New York Times, explore how all of this came to be in their new book, That Used to Be Us (Farrar, Straus and Giroux, 2011). A polemic written in a breezy tone that’s equal parts policy wonk and a football coach’s tough-love halftime speech, the book specifies four umbrella challenges facing the country: globalization, with its emerging markets and cheaper manufacturing options; steadily evolving information technology that demands a better educated and more flexible work force; large and soaring budget deficits; and rising energy consumption and climate threats. But they take the book’s subtitle, “How America Fell Behind in the World It Invented and How We Can Come Back,” seriously and offer a rebound strategy: Return to the spirit that made the country great in the first place. As they write in the book: “Our problem is us—what we are doing and not doing, how our political system is functioning and not functioning. . . . And our solution is us—the people, the society, and the government that we used to be.”

How we used to be, for the authors, is less of an idealized past than a set of values that built the country, especially during its postwar boom. They believe the achievements of those years resulted from a collective push by the country’s citizens and government. “What we are invoking is a spirit, an attitude,” Mandel­baum says. “And that is something that we experienced in our childhood, but it’s been part of American society and the American ethos for a very long time. It wasn’t just a moment in the 1950s and 1960s.”

Their approach in That Used to Be Us mixes logical cause and effect with a nimble bit of opportune hindsight. For each hot topic, the authors identify the current situation and then wind through the strands of popular culture, economic policy, historical events, scientific research, etc., that were braided together to get here. It’s a history of the present told through the news stories and policy decisions of the recent past.

One of their more persuasive arguments is that 1979 was a pivotal year in the country’s energy future. That was the year a popular movie (The China Syndrome) eerily anticipated an actual scare (the Three Mile Island Nuclear Generating Station incident). That was the year oil prices spiked following the religious unrest percolating through the Middle East. That was the year China issued its first-ever business license. That was the year an MIT scientist chaired a study group that determined that the continued burning of fossil fuels would lead to a warmer Earth. Mandelbaum and Friedman argue that these events rippled out to inform and shape the country economically and politically—on its nuclear energy policy, on what the United States is willing to do financially and militarily in pursuit of oil, on its competition with China for global energy resources and the development of sustainable energy technology, on how the country has and hasn’t responded to climate change or pursued alternative energy resources.

The authors don’t believe that the nation can’t recover. “We are suggesting that, in order to meet the challenges of the future, the United States has to go back to its roots,” Mandelbaum says. Those roots—public education, adequate infrastructure, immigration, government-supported research and development, regulating public economic activity—created the political and economic superpower that they say contributed to the fall of communism and the rise of global democracies and free markets. “We believe that this approach is really an integral part of the American character,” Mandelbaum says. “And although it hasn’t been enough in evidence in recent years, we think it still exists, it’s still part of our political DNA.”