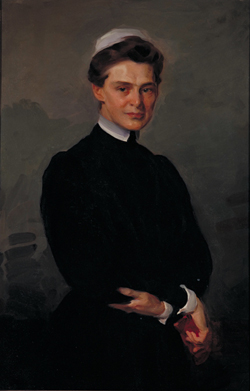 American painter Cecilia Beaux is best known for her late 19th-century portraits of the well-heeled society members of her native Philadelphia and, eventually, other big cities on the Eastern Seaboard. The women in those paintings are often pampered by birthright, wearing ornate, ruffled white dresses with high necks and flowing sleeves, and seated or assuming some other posture of casual leisure. It was the men of this era who appear formidable in Beaux portraits, standing with straight backs and clad in dark colors. Unless, of course, the female sitter happens to be as accomplished, intelligent, and driven as Mary Adelaide Nutting, in which case she is depicted as seen here: as a woman who looks so unflappably confident, pity the man who underestimates her.

This Quebec native moved to Baltimore to enter Johns Hopkins’ first class of nursing students in 1889, which started her unprecedented rise—from student to head nurse at the hospital, from head nurse to superintendent of the hospital and principal of the School of Nursing, and finally from Johns Hopkins University to Columbia University’s Teachers College, where she became its first professor of nursing. En route, she helped establish a pre-nursing training program, co-wrote half of a four-volume history of nursing, helped establish the American Journal of Nursing and the U.S. Army Nurse Corps, and, in general, worked tirelessly to imbue nursing with the same sort of high standards and rigor as other medical professions.