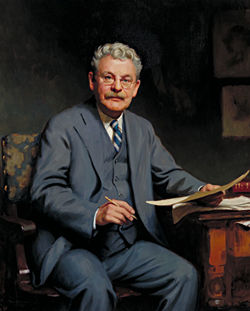 The Department of Art as Applied to Medicine, which was founded by German émigré Max Brödel, celebrated its centennial this year as the first medical illustration program of its kind. In the era before affordable and immediate photography, Brödel’s illustrations were in heavy demand by Johns Hopkins faculty for their anatomical correctness and exquisite realism, doing to the inside of the body what John James Audubon did for birds. But Brödel was more than a serious artist; he was a close friend of H.L. Mencken and member of the Saturday Night Club, where the pair would heartily eat, drink, and play the piano. He also provided the illustration logo for the Society of Pithotomists, a club founded by the School of Medicine’s first class. The club was dedicated to the “promotion of vice among the virtuous, virtue among the vicious, and good fellowship among all,” and the logo design includes Gambrinus, the unofficial patron saint of beer, which Brödel depicted as a cherubic baby sitting astride a beer keg—and who appears well into his cups.

That mix of studiousness and conviviality is captured in Thomas C. Corner’s 1938 portrait. Corner was a popular Baltimore portraitist in the early half of the 20th century, painting scores of lawyers, politicians, and anyone else with a certain social cachet. As a 1940 pamphlet from the Federal Writers’ Project titled Maryland: A Guide to the Old Line State observes, “There is hardly a public building in Baltimore and other cities of the state that does not have a Corner portrait of some favorite son.”