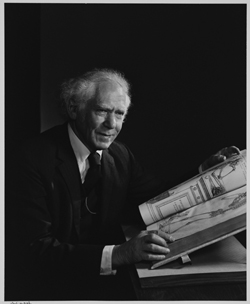 When Owsei Temkin died in 2002 a few months shy of his 100th birthday, Johns Hopkins didn’t just lose the man who helped build its Institute of the History of Medicine; the medical history field lost one of the scholars who helped shape it into a discipline. “He was one of my mentors,” McCall says. “I am deeply fond of him.”

McCall used to visit him during his final years when he lived in a retirement community, and though he had the body of a nonagenarian, his mind remained as sharp and nimble as ever. He even worked on and published a book during the last year of his life, “On Second Thought” and Other Essays in the History of Medicine and Science, which he assembled with the help of his daughter, Judith Temkin Irvine, a University of Michigan professor of anthropology. By then, Temkin was unable to write or type, so he would dictate to his daughter. After Temkin’s death, McCall met up with Irvine, and they talked about her late father and working on the book. “She said he just drove her nearly nuts,” McCall laughs. “And that was because his corrections were always spot-on.”

A sense of that fastidious industriousness comes through in this photograph by Yousuf Karsh. Temkin sits at a desk inspecting an oversized medical text, the pure joy of this intellectual pursuit witnessed in the spark in his eye. The Armenian-Canadian photographer Karsh specialized in illuminating his subjects’ personalities in supple black-and-white portraits, and his lens captured decades’ worth of 20th-century history-makers, from W.H. Auden and Fidel Castro to Grace Kelly and Andy Warhol.