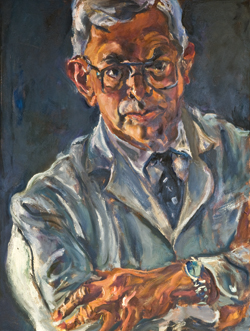 The Division of Neuroimmunology and Neurological Infections is dedicated in honor of Richard Johnson, but the pioneering neurologist also owns another distinction: His portrait is one of the few painted by a Johns Hopkins alumnus. Raoul Middleman, A&S ’55, who earned his bachelor’s degree and then promptly set out to work as a Montana ranch hand, picked up drawing when he entered the Army in 1957.  After completing his service, he started studying painting in Philadelphia before moving to New York in the early 1960s, just in time to watch pop art gain steam while he opted to pursue a more traditional approach. Ever since, he’s put his own idiosyncratic fingerprint on naturalistic portraiture. As evidenced in this portrait, Middleman is a bit of an eccentric realist—his vocabulary a combination of thick, gestural brushwork; a nostalgic predilection for old masters’ fusty palette; and a rather impish approach to composition, cropping the top of Johnson’s head and his left arm out of the frame. The result is an almost irreverent version of the stately portraits that fill the collection, and yet it delivers a different kind of seriousness. Middleman’s rough-hewn canvas can initially feel like it’s only implying a person, anxious layers and strips of paint coalescing into a hand, pigment smudges knotting into a furrowed brow. It’s only after acclimating oneself to how Middleman articulates his subject that the image of a man of exceptional competence comes into sharp focus—a disarmingly poetic and sympathetic portrait of a doctor who spent his career exploring diseases of the nervous system.