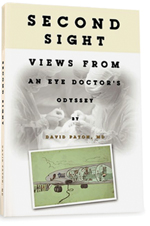 The son of a prominent ophthalmologist, David Paton survived the perils of a privileged upbringing, and of dyslexia, to become chief resident at the Wilmer Eye Institute, where East Baltimore’s ills focused him on the failings of medicine in the developing world. In 1982, he founded ORBIS International, a nonprofit flying eye clinic staffed with doctors willing to teach modern methods of sight saving to physicians in developing nations. ORBIS (so named because “the word stood for ‘world’ and also for ‘eyeball,’” Paton writes) continues to operate today via its Flying Eye Hospital and a number of permanent offices. Paton’s odyssey illustrates his propensity for surviving setbacks and stretching the limits of how far a Hopkins doc can travel.

This Life of Sounds: Evenings for New Music in Buffalo

From 1964 to 1980, SUNY Buffalo’s Center of the Creative and Performing Arts upstaged Manhattan as a crucible of New Music—largely classical in origin yet often chaotic, rudely iconoclastic, and provocative. The works of John Cage loomed throughout, as did the whiff of marijuana. Administrator Renee Levine-Packer herded these “musical outlaws” and has chronicled the experience nonjudgmentally. Her descriptions can run to farce, such as one performance that interspersed lights and video to create what the lead performer termed the “refrigerator syndrome—when the refrigerator turns off, you suddenly are aware it was there.” State spending priorities contributed to the center’s demise, but its annual festival lives on. Not April in Paris but June in Buffalo.