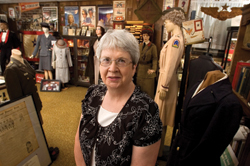 Peg Leiendecker didn’t set out to create a museum in the basement of her home—­it just happened. Photo: Jeff Mankie

In a city that draws tens of thousands of visitors every year to historical sites such as Monticello and Montpelier, a singular collection of wartime memorabilia resides in a little-known museum. Displayed on mannequins are military nursing uniforms—complete with accessories such as overcoats, handbags, and hats—and one of the very first bomb disposal suits. U.S. Cadet Nurse Corps posters and “Sons in Service” flags adorn the walls. Glass display cases house British cap and collar badges, and an antique typeset cabinet showcases World War I– and World War II–era jewelry, pendants, and pins. Ask collector Peg Leiendecker what she and her husband call their museum, however, and she’ll answer, “Our basement.”

The couple didn’t set out to create a private museum in the basement of their Charlottesville, Virginia, home. “It’s like putting on pounds,” Leiendecker says. “It just happened.” Her husband, Bob, a retired U.S. Army explosive ordnance disposal (EOD) officer and military historian, had been collecting bomb disposal items for years. Leiendecker, a retired nurse, frequently tagged along on visits to antique shops and trade shows. On one pivotal occasion, she says, “I met this one fellow at an antique show who had a World War II nursing uniform on display. I got to talking with him and before I knew it, I had purchased this uniform for $125 and that was it.” Leiendecker began doing some additional research to find related items and the collection “just mushroomed,” she says.

Today, more than 20 years later, the Leiendeckers’ 1,800-square-foot basement (about two-thirds the size of a high school basketball court) is filled with roughly 6,000 pieces of nursing and bomb disposal militaria, carefully assembled from combing flea markets, antique malls, and the Web. Leiendecker says she and her husband are collectors by nature. “[Collecting] is something that you can learn to do, but you still need to have that love, that desire, that wanting to,” she says. Among her favorite items are the U.S. Cadet Nurse Corps uniforms, including a gray felt winter uniform with a matching overcoat and a lightweight summer uniform accessorized with a straw hat with a red band. The Cadet Nurse program, created by the government to recruit nurses during World War II, was short-lived but vital, Leiendecker says. “This was a period in time when there were very few nurses in the Army, and they were desperately needed.”

Leiendecker’s own nursing career began in 1965, shortly after she finished her degree at the School of Nursing. She started out in the pediatrics unit of Lynchburg General Hospital, where she worked for the pediatrician who took care of her as a child. She took a break from nursing while raising her family and living at various posts during her husband’s career in the Army. In the mid-1980s she went back to nursing, working in the operating room at Martha Jefferson Hospital in Charlottesville. She retired in 2004, freeing up more time to focus on collecting and her other hobbies: reading, knitting, tai chi, and cooking.

Now that their basement is nearly full—the only open spot left is the ceiling—the Leiendeckers have stopped collecting large pieces, such as uniforms and posters. Their focus now is on smaller items, including EOD patches and badges from around the world, books, and military “sweetheart jewelry.” The tradition of sweetheart jewelry, with designs representing the soldier’s branch of service, began during World War I as servicemen sent home necklaces, bracelets, and pins to their loved ones.

Although the bulk of Leiendecker’s collection focuses on nursing, she has also devoted some floor and wall space to the Women Airforce Service Pilots and their predecessors, the Women’s Auxiliary Ferrying Squadron. These were civilian pilots who flew military airplanes from where they were built to where they were needed, under the direction of the U.S. Army Air Force. They were an underappreciated group, Leiendecker says, who never received a military pension and were not recognized for their service until decades after the end of the war, even though many of them were killed while operating experimental aircraft.

Leiendecker’s collection (which is invitation-only and not open to the public) is an education in women’s contributions to the great world wars. She views it as a tribute to all of those women who “have done so much and have not always been recognized for their participation and what they have given during the wars, after the wars, and before.”