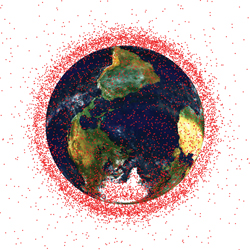 It’s a mess up there.

A half-century of launching satellites has turned the skies above Earth’s atmosphere decidedly unfriendly. The problem: Of the 5,000 or so satellites launched by the United States and a dozen other countries, only 1,000 still work. A few of the nonoperational craft have “de-orbited,” burning or breaking up as gravity pulled them back through the atmosphere. But the vast majority—and the rockets used to launch them—still circle the globe, joined by the 100 or so additional satellites sent up each year. In all, they make near-Earth space a chaos of clutter.

It’s not simply an issue of overcrowding. As more spacecraft become reduced to orbiting rubble, the pieces are more likely to smash into other things, creating even more junk that endangers working equipment vital to communications, militaries around the world, the security of several nations, and the lives of humans working on a space station. Even at best, the space junk dilemma limits the number of altitudes where scientists can place satellites safely.

In the past four years, events have reminded space scientists of the need to envision near-Earth space as a floating junkyard. In 2007, the explosion from a Chinese antisatellite test bashed an old Chinese craft into bits, greatly increasing the amount of space trash and upping the likelihood of future smashups. Two years later, an active American satellite collided with a spent Russian one, destroying both. Two pieces of junk turned into thousands in an instant, making attentive scientists downright nervous.

“If we don’t do anything to deal with this, we’ll see another major collision within the next 10 to 15 years,” warns Marshall Kaplan, a senior researcher in the Space Department at the Applied Physics Laboratory. Kaplan is no idle observer or latent alarmist. With the help of other APL scientists, he draws on 40-plus years of space research experience and his imagination to come up with ways to deal with space junk. “The amount of debris is building exponentially. If we continue to launch [satellites] without making plans for dealing with space junk, we’ll see a chain reaction of collisions. We’ve been lucky in the last few years,” he says.

The low-Earth orbit region (somewhere between 400 and 800 miles) is the cosmic equivalent of a hoarding cat lady’s house—full of used-up appliances (or, in this case, satellites), broken-off furniture pieces (parts of early-stage launch rockets and nuts and bolts shed by satellites), and litter boxes (such as the garbage bags tossed from the space station Mir). There could conceivably be more than 100,000 pieces of stuff, much of which we can’t see because some of the pieces are as small as one-half a centimeter—tiny bits that nevertheless can tear through the wall of a space station, causing the pressure in residential cabins to plunge and leading to the deaths of those living there. “All decaying debris passes through the space station’s orbiting altitude,” Kaplan says. “If one larger piece hits that baby, it’s all over.”

To deal with the problem, Kaplan, aided by Pentagon financing, has written several papers in the past four years laying out various methods for getting rid of space junk—or at least getting around it. He says governments of the world have three main options. One, they could increase observance of existing international treaties that encourage spacefaring countries to put better shielding on their satellites, limit the number of bolts and other pieces that could become loose and dislodge, and ensure that satellites have enough propellant to end their orbits and return to the atmosphere when they are no longer needed. The second option would be to devise ways of sweeping up the mess. But a lack of workable technology, worries about international cooperation, and high costs—it might take hundreds of billions of dollars—make this the least likely of the three options. (“It’ll never happen,” Kaplan says.) A third solution, one that Kaplan advocates, would take advantage of advances in computing to create and launch smaller satellites that make a smaller “footprint” in space and can be placed in lower orbits. By setting them in relatively uncluttered areas below 400 miles above Earth, nations would minimize the risk of collision and creating more junk. “Rather than attacking debris, we should concentrate on reinventing space,” Kaplan says. He adds that satellite-borne computers are much more useful and powerful now than when most existing satellites were created. Linked in new, more efficient ways, these smaller craft could provide more information to scientists and the military than the much larger satellites of years past. “There are advantages to doing things this way,” Kaplan says. “We’d be able to see any spot on Earth at any time. Right now, we don’t have that capability.”

Creating a plan before an emergency strikes is the latest space-junk challenge Kaplan has taken on in his long career. While teaching at Penn State more than 40 years ago, he earned a grant from NASA to investigate ways to recover Sputnik, the benchmark Soviet satellite launched in 1957. (The craft went out of orbit before he could implement a plan.) In 1979, Kaplan was NASA’s point man in devising a safe re-entry scenario for the declining orbit of Skylab, the massive data-gathering space station that threatened to crash onto land. His ideas helped to plunge it safely into the Indian Ocean—and made him a national celebrity, albeit briefly—though western Australia was hit with some pieces of the disintegrating station.

The Skylab era featured only about 1,000 pieces of space junk. Now, he says, with debris out of control, we’re facing a much larger problem than a satellite crashing to Earth. He’s not holding his breath waiting for the world to deal with it. “A new vision of space won’t happen until it has to,” he says. “It may take a major collision or two for us to change the way we deal with this.”

Space: The Final Frontier for Our Junk
Satellite Killers: Meteoroids vs. Space Junk