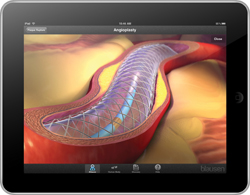 Besides updating your Twitter status or slicing digital pomegranates with Fruit Ninja, your smartphone can also help you learn about gestational diabetes, mitral valve stenosis, and a host of other medical conditions, thanks to Bruce Blausen. His Human Atlas app—available for the Web, smartphones, tablet computers, and bedside LCD monitors—uses 3-D video animations to explain over 300 common medical conditions and treatments.

A graduate of the Art as Applied to Medicine program and a tech enthusiast, Blausen was among the first to recognize how new digital technology could transform patient education. Fifteen years ago, when his mother, Dolores, was experiencing heart trouble and asked him to explain “this stuff” to her, he created and sent her VHS tapes of stock medical animations. He later learned that she was sharing them with other seniors in her retirement home who wanted a better understanding of their own medical conditions. Recognizing an unmet market, Blausen began to form an idea for what would eventually become the Human Atlas app. Later, with the surging popularity of smartphones, he saw a way to have educational animations in the palm of your hand, right at the point of care. “Within one or two minutes, a physician could explain and show video animation of atrial fibrillation,” Blausen says. “The patient gets a better grasp of what’s being done to him, thereby alleviating many of his fears and concerns.”

To date, Blausen reports over 125,000 downloads of the Human Atlas app worldwide in more than a dozen languages. Along with plans for further international expansion, Blausen and his partners are working on a method of creating rich media for electronic medical records. Their new product will scan a patient’s records, searching for key words and delivering media, such as video animations, wherever one of those words appears. “With the convergence of new technology and the consumer’s appetite for rich media and animations,” Blausen muses, “I think this market will continue to grow and transform the field of patient education worldwide.”