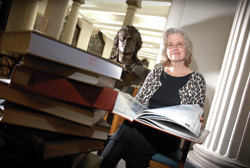 Novelist Jean McGarry sits at a table in the Gilman atrium on the Homewood campus on a sunny June afternoon, looking like what she has been since 1988—a creative writing professor in the Writing Seminars at the Krieger School of Arts and Sciences. She’s clad in casual slacks and a lightweight shirt, and a copy of her 2010 short-story collection Ocean State sits nearby on the table. But the way she jots notes to herself onto a yellow legal pad makes her look a bit like a psychoanalyst, perhaps because she recently completed five years of psychoanalytic training.

In 2006, McGarry entered the Baltimore Washington Center for Psychoanalysis, an institute devoted to training clinicians in what McGarry calls “classical, and rather conservative, Freudian analysis.” She enrolled as an academic candidate—a student who will not be a practicing clinician—of which the center has only admitted a few, ever. There, she did everything the psychology MDs and PhDs and psychiatric social workers did, except see patients as part of a clinical practice.

The five years of study equipped her with an analyst’s arsenal. “I can now tell people who would be good in analysis,” she says as casually as she’d order a soda. “I can tell when people need it, and I can tell when someone would benefit from it.” She believes the experience has influenced her as a reader, teacher, and writer as well. “Freud teaches his readers to look for the things that were left out—to look for the blind spots, to look at texts not in a formalistic way but to look at them and think of them almost as opportunities to see something else,” she says.

The author sees a parallel relationship between analyst and patient and teacher and student. “How you tell your stories is a very personal and a very troubled process, and sometimes a teacher can be helpful in exactly the kinds of ways an analyst can be helpful.” She tells of a graduate writing student who wrote a story about attending a prestigious university and feeling very insecure around her well-educated, affluent peers. After graduation, the character still hung out with these friends, and her feelings of inferiority persisted. “It was a story of hurt and injury,” McGarry says. “And it was shapeless, except that it had the shape of, ‘Oh, look at poor me.’” There were “so many ways in which the character is criticizing these people. But the writer doesn’t see that that’s there, too. And yet the dynamic of the story lies there, in the difference between what these snobs and elitists thought they were and what she saw.”

At the center, learning involved “students reading classical essays on psychoanalysis and process notes and groping toward understanding,” McGarry says. The training was tripartite: Candidates—the center calls its students candidates—all had to undergo analysis, observe clinicians seeing patients, and participate in lectures and discussions. The discussions started with the ethics of analysis, addressing the need to protect patient identity and potential conflicts of interest, which was followed up by a class on analyzability, a semester-long course on what qualities make a person appropriate for analysis.

A good portion of that class discussed whether patients were presenting with problems treatable by long-term analysis. But it also brought up the issue of whether the patient would be able to cope with how analysis works, which involves talking for extended periods of time. “Psychoanalysis is an entirely verbal process, which is, of course, fascinating to me,” McGarry says. A number of classes were case conferences, where a teaching analyst would read from his or her clinical notes, which reproduced verbatim what the patient said. The candidates would then examine and discuss the patient based on how the patient presented a problem. This keen focus on language—on metaphors and symbolism, word choices, passages of time—isn’t that different from writing workshop discussions. And the center’s conversational teaching style influenced McGarry in her classrooms, too. “I think that learning is probably a little bit like an analysis, and [students] do a lot of the work themselves and they have to be ready for it,” McGarry says. “So my teaching has become a little bit more like a conversation as opposed to a lecture. I think it’s important to listen—to hear what their understanding is and not immediately correct it.”

The entire experience has left her feeling that she has a richer understanding of storytelling’s capacity. “I really believe that psychoanalysis teaches you that you have to live with the past. It hasn’t gone away—and I think for a writer that’s a fantastic thing. Because that means you really do remember what happened even if you think you don’t. And when you think about what the potential is for human fictions, the idea that we contain that much is a great thing.”