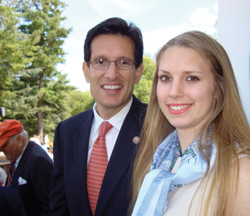 Hadley Nagel’s brush with history rubbed her the wrong way. Four years ago as a high school sophomore, Nagel visited Montpelier, the restored home of the nation’s fourth president, James Madison, in Orange, Virginia. Enthralled by the story the mansion told—of Madison crafting the Bill of Rights and other parts of the Constitution and shepherding the country through the War of 1812—Nagel was shocked to learn that there was no national monument to him. When her Manhattan high school sent her to a women’s leadership conference later that year, “I decided that honoring James Madison’s legacy and working toward gaining him his long-overdue memorial would be my action project,” she says.

Since then, Nagel, now 20, has immersed herself in all things Madisonian—part of her mission to give Madison what she sees as his historical due. A member of the Johns Hopkins Class of 2013 and a Hodson Trust Scholar, Nagel has lobbied Congress to authorize and build a federal monument to Madison on the mall in Washington, D.C. Last year, she organized a panel of historians to discuss the seminal role Madison played in setting the tone for the nation and its laws. She spent a summer at the University of Virginia poring over the papers of Madison’s wife, Dolley, and wrote her Hopkins sophomore history thesis on the relationship between Madison and Napoleon during the War of 1812. And she helped edit a booklet, James Madison & the Birth of the U.S. Constitution (published last year by the Gilder Lehrman Institute of American History), to teach schoolkids about Madison in conjunction with Constitution Day, September 17.

“Today, we’d call Madison a nerd,” Nagel says. “But Madison was our most important political thinker. As a nation, we often believe that our power lies in might and economic influence when, in fact, it is our Constitution that has paved the way for who we are and how we’ve been emulated around the world.”

The lack of a monument seems especially glaring—to Nagel, at least—when one considers that 15 other presidents have been memorialized in stone or bronze. The formative stars of U.S. history—Thomas Jefferson, Abraham Lincoln, George Washington—have the showiest palaces in prime Washington locations. The capital also sports less decorous monuments to Ulysses S. Grant, Andrew Jackson, and both Roosevelts. John F. Kennedy is memorialized in Dallas, where he was killed, and William McKinley’s monument was erected in Canton, Ohio, his hometown. At the base of the Capitol sits a statue of James Garfield, who served all of 200 days as president before being assassinated in 1881.

But Madison remains a ghost, a no-show in the land of the righteously remembered. Nagel’s first stab four years ago at a federal bill to change that fell apart when its author, Democratic Rep. Baron Hill of Indiana, lost an election to a Tea Party candidate in 2010. So she crossed the aisle to work with Republican Rep. Eric Cantor, the House majority leader. Her hope is that Cantor, who holds the same congressional seat Madison held from 1789 to 1797 when he formulated the Bill of Rights, will resurrect the monument legislation. Nagel, who keeps mum about her own political leanings, says she hasn’t gotten the bill reintroduced yet, but she has received enough encouragement from Cantor and Supreme Court Chief Justice John Roberts Jr. to keep fighting.

If Madison were here today, Nagel’s campaign might resonate with him. Before he died, he despaired that his fellow citizens never understood him. “Madison is our most underrecognized and underappreciated president, perhaps because he was a quiet genius,” says Nagel. “We study political philosophers like Hobbes, Locke, and Marx while James Madison has been totally ignored. In many ways, he is really the father of most democracies that exist today.”