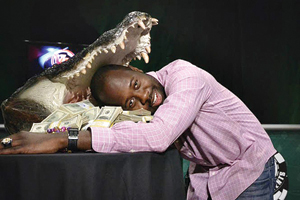 It was a surreal scene in New Orleans this past May. A.J. Jejelowo posed with a broad smile, his World Series of Poker Circuit championship ring shining under bright television lighting. And then there was the cash—$235,956 displayed with a bit of Cajun flair inside the wide mouth and sharp teeth of a stuffed alligator. Jejelowo embraced his cash, his head snugly inside the gator’s bite. Moments earlier, he had won the Southern Regional Championship poker game at Harrah’s New Orleans casino. After the four-day Texas Hold’em tournament, including a grueling 12 hours spent at the final table, Jejelowo could think about only one thing: “I was exhausted. I really couldn’t think of anything else but climbing into bed and going to sleep.”

An amateur poker player, Jejelowo is fairly new to the game. “I didn’t even know the rules of poker until I graduated from college. I was more focused on passing my classes and chasing girls,” he says with a laugh. Jejelowo, who was born in Manchester, England, moved to the United States when he was 9 and grew up near Houston. Initially drawn to Johns Hopkins for its medical program, he later chose to major in biomedical engineering. That learning environment helped him succeed in surprising ways, including applying the problem-solving techniques he learned in class to the poker felt. “I think Hopkins helped me become very resourceful and creative. I can work my way through a lot of situations,” he says. After earning his degree from the Whiting School of Engineering, he got a job as a biomedical researcher at Rice University in Houston, where he began playing small-stakes poker tournaments with friends. As his “real” career advanced, his love of the game continued to grow.

Making the final table in poker takes stamina and deep focus. One bad play or mistake, and your tournament life could be over. After day one, Jejelowo had only a short stack of chips left, but, turning his fortunes around, he built a mountain of chips in subsequent days. Eventually, he was heads-up at the final table with Gary Friedlander, a successful player from Bellaire, Texas, who had almost $750,000 in career winnings. The cards were dealt, two facedown to each player, with Jejelowo holding Ace-9 and Friedlander holding a dominating Ace-King. With all their chips in, the last five cards—community cards, which the dealer places faceup in the middle of the table—would determine the tournament winner. The cards fell Q-6-5-A-9, and the last card dealt was the miracle, giving Jejelowo two pair—Aces and 9s—enough to win the hand and the championship.

What does the 27-year-old plan to do with the cash? “When you come into a relatively large sum of money, you have an immediate temptation. I seriously considered buying a car or putting a nice down payment on a house, but I don’t really need the money,” Jejelowo says. “I don’t have any kids, I don’t have a ton of debt. So I’m using the money for graduate school, investing some to build wealth, and the rest I’m saving for a rainy day.”