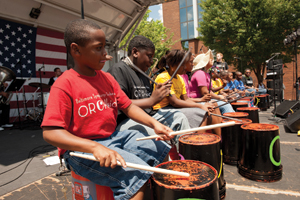 “The best medicine is for the kids to be performing all the time,” says Dan Trahey, co-founder of OrchKids. Photo: Jay VanRensselaer

On a steamy July afternoon, two rows of upside-down Home Depot buckets line the Festival Stage at Artscape, Baltimore’s annual summer festival. Twelve elementary school–age kids wearing brightly colored T-shirts that say “Baltimore Symphony Orchestra OrchKids” walk in a single line onto the stage, grab sets of drumsticks, and sit on the orange buckets in the back row. Standing in front of them, Dan Trahey leads the warm-up, guiding the kids to clack their sticks together and pound out a deep rhythm on their bucket drums.

Trahey is one of more than a dozen Peabody alumni, faculty members, and students who teach music to underserved children from West Baltimore’s Lockerman Bundy Elementary School, New Song Academy, and Mary Ann Winterling Elementary School through the OrchKids program. OrchKids was co-founded in 2008 by Trahey, the program’s artistic director, and Marin Alsop, music director for the Baltimore Symphony Orchestra and a Peabody distinguished visiting artist. The program is inspired by El Sistema, a social movement that has used music to create community among poor young people in Venezuela since 1975. “There’s not a lot of lower-middle-class people playing in orchestras because of the time and financial resources it takes to get to that precision level,” Trahey explains. Trahey knows this firsthand: Growing up working class in Traverse City, Michigan, his family didn’t have the money to buy him a musical instrument. But the local bar had a tuba hanging on its wall, which the bartender gave to his parents. Trahey played that tuba for six years, eventually using it to audition at Peabody.

OrchKids is an intensive program. Children in pre- kindergarten through fourth grade practice their bass, brass, string, wind, or bucket drum instruments (which are inexpensive and portable) and participate in their school choirs two to eight hours a day, up to six days a week. But the substantial time commitment hasn’t deterred enrollment: In the 2010–2011 school year, the orchestra was 220 children strong; in 2011–2012, more than 300 students enrolled. Trahey—who also helped found Tuned-In, a program that gives Peabody Preparatory scholarships to public middle and high school students—has even traveled to several states and countries, including North Carolina, California, England, and Austria, to help local educators start similar programs.

Unlike other orchestras, the OrchKids curriculum isn’t driven by technical proficiency. “We are passion first, precision second,” Trahey says. The program stresses teamwork and mentoring, with more experienced students mentoring younger musicians. Staff also play with the children at their many “rallies”—OrchKids’ term for performances—to give the kids help and guidance in achieving the sound they want to create. At Artscape, brass instructor Peter Lander, Peab ’99, ’99 (PC), wails the vocals to Stevie Wonder’s “Sir Duke” while six brass students contribute the jazzy melody. For an orchestral version of Lady Gaga’s “Bad Romance,” two staff members and one student strum the deep, haunting chords on their upright basses. And for “Kalélé,” a traditional African folk song, local beatboxer Shodekeh provides a human percussion accompaniment to the OrchKids choir. One young student, a tiny girl with rows of colorful beads in her hair, takes the microphone from Shodekeh and quietly pumps out her own beat to the audience’s cheers. “The best medicine is for the kids to be performing all the time,” Trahey says. “[Audiences] show love for the amount of hard work that these kids put in.”

The audience whoops even louder during OrchKids’ final number, a group rendition of “One Day” performed with the song’s artist, Matisyahu, a Hasidic Jewish reggae singer and Artscape’s headlining performer. Wearing sunglasses and a black yarmulke, the bearded Matisyahu, his voice a deep contrast to the children’s high pitches, sings with the OrchKids chorus, while Trahey, his body moving to the beat, directs the staff orchestra, including Lander; Elijah Wirth, Peab ’99, ’02 (MM); Rafaela Dreisin, Peab ’10 (MM); and Hana Morford, Peab ’11 (GPD). With lyrics like “Sometimes in my tears I drown / but I never let it get me down / so when negativity surrounds / I know one day it will all turn around,” the song captures the attitude that Peabody alumni hope to instill in Baltimore’s underserved students. “This is preventive medicine,” Trahey says.