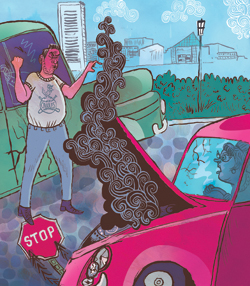 Baltimore is No. 1. Or we would be if the bloated bureaucrats south of us weren’t stealing what is rightfully ours. This isn’t about taxes.

A recent Allstate study of U.S. drivers ranked Baltimore’s second-worst, with Washington, D.C., at the bottom of the heap. We were robbed. So was Boston, whose daredevil drivers weren’t even rated. Any survey of bad driving omitting Boston is suspect. But I’d take our vehicular team over Boston’s any day. Drivers there know what they are doing, even if it is dangerous, illegal, and at high speed. Reason and purpose don’t restrain Baltimore’s drivers. The most serious flaw in the survey, however, is that it measures where bad driving occurs, not who is doing it. A fair fraction of D.C.’s mayhem comes from Baltimore drivers not paying attention to where they were going and unwilling to interrupt the cell phone conversation to find out. We get no credit for that.

This past September, Baltimore had its first Grand Prix. Who needed it? The winning driver only averaged 91.5 mph on a special racecourse with no potholes or pedestrians. Lawn chairs along major thoroughfares would have been cheaper, done nothing to disrupt the downtown area for a week, and yielded as much high-speed excitement.

Speed, nonetheless, is not what distinguishes Baltimore drivers. They are capable of going very slowly, although only in the left lane and sometimes when running red lights. That brings me to Baltimore drivers’ signature event: red-light running. It happens elsewhere, but here it is epidemic and executed in a rich variety of styles, from casual to maniacal. In one instance, my green light turned yellow before cars coming toward me finished running a red left-turn arrow. A recent guest who had been away from Baltimore for a while responded to an especially spectacular red-light run with a nostalgic “I’m back.”

Baltimoreans’ bad driving repertoire includes sins of omission as well as ones of commission. There is, for instance, a local taboo against turn signals. When it is violated, the signals are not used in the predictive manner common elsewhere (“I will move into your lane”). They are used after the fact and in an explanatory manner (“I just cut you off”). Occasionally, you will see a turn signal on—and on, and on. It means: “I bumped that thing next to the steering wheel and some damn clicking sound won’t stop.”

The true genius of Baltimore’s bad drivers is that they can be obnoxious when their cars are standing still. Double-parking parallel to huge empty parking places is a specialty, and so is carrying on a conversation with someone standing in the street while doing so. In the rare event the double-parker uses emergency flashers, you have a Baltimore wannabe, not the real deal.

Bad drivers here don’t even need to be near their cars to cause problems. Take parking. When snow falls, it is rapid, random, and results in vehicle abandonment in places where other drivers might wish to go. In all seasons, parking is a contact sport in which the goal is to get as close as possible to the car in front of or behind you. Touch parking like this was common in my former neighborhood, where I once came across a young woman on her cell phone, screaming hysterically. That wasn’t especially unusual for the place, nor was the cause. The cars in front of and behind hers each nuzzled her car’s bumpers.

Like other urban areas, Baltimore needs many things—more jobs, better housing, lower taxes, more tax revenue, better law enforcement and schools, leaner budgets, and the list goes on. Given the human and economic damage bad drivers cause, and the rudeness and incivility they embody, good driving might belong on that list.