Exploring the Link between Art and Memory
November 30, 2011 |  by Michael Anft

Four years ago, Lonni Sue Johnson’s life story was as rich and vivid as her work. An artist of precisely detailed, often witty drawings—several had graced the cover of the New Yorker and the business page of the New York Times—Johnson also regularly bowed her viola and piloted planes. Suddenly, that story all but disappeared. One snowy day, a neighbor stopped by Johnson’s upstate New York organic dairy farm and found the usually effusive and alert Lonni Sue doing little more than staring at her computer mouse. Something was clearly wrong. 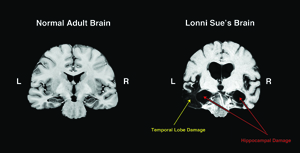 After being driven to a hospital, an MRI showed that the center of her brain had been ravaged. The cause, viral encephalitis, came with a high fever that almost killed her. Although her life was ultimately spared, her hippocampus had been wiped out, along with the memories that are formed and stored there. With the help of her family, she began to rebuild her life, albeit tenuously—her grasp of events remained slippery. Johnson was totally disabled. She had to learn to walk and talk again. Much of the cultural and intellectual knowledge she once held had been erased from her memory banks. Even Van Gogh’s Starry Night became a stranger to her. And yet, the personality of her art—the gracefully curving lines, the playful sense of humor—began to announce itself anew as she recovered.

In all that lay a source of fascination for scientists. In 2009, Barbara Landau, a former high school classmate of Johnson’s in Prince-ton, New Jersey, heard about her case. Landau, a professor of cognitive science at the Krieger School, spoke with Johnson’s family about having Lonni Sue take part in research that would examine the effects of viral encephalitis on brain function and creativity, and the family enthusiastically agreed. Landau and other Krieger School scientists have found that Johnson, now 61, suffers from amnesia of events both before and after her bout with encephalitis, and that she is unable to form new memories.

And yet, much of her artistic skills remained intact, though she needed to be retrained in the use of a pencil and still requires encouragement to keep developing her innate skills. “One hypothesis you can make from her case is that you don’t need a working hippocampus—a fully functioning memory—to be creative,” says Landau.

Johnson’s saga is reminiscent of one of the most cited cases in the annals of neuroscience, that of “H.M.,” a young man who had suffered from epilepsy since being run over by a bike as a child. As a young adult in the 1950s, H.M. had seizures that became so debilitating that he could barely function. A neurosurgeon removed his temporal lobe, including the hippocampus, the part of the brain where the seizures originated. After surgery, however, H.M. lost the ability to remember any new information. Like Johnson, he would forget events as soon as they happened. During the 40 years afterward that scientists studied him, H.M. never recovered his ability to make new memories. But as one researcher taught him over time how to trace the outline of a star in a mirror, he improved at it—even though he couldn’t remember ever tracing a star before.

Likewise in Johnson’s case, she may be able to learn some new things, a possibility that Johns Hopkins scientists are testing. “She may be able to carry out what we call implicit learning,” says Landau. Johnson’s performance on language-and-symbols tests is now being studied to see if repeated testing improves her abilities, even though she doesn’t remember taking the tests before. It’s also possible that Johnson has been able to tap into something called “nondeclarative memory” or “procedural memory”—a recall of motor skills and tasks that have been learned and retained almost automatically, such as riding a bike. Landau says she witnessed Johnson touch-typing successfully on a laptop, even though she hadn’t used a computer since falling ill.

Unlike H.M., who could remember many events from his childhood, Johnson’s autobiography is missing entire chapters. She cannot remember her former marriage or the death of her father, both of which occurred before her illness. Because she instantly forgets things, Johnson continues to need help with daily activities. But what she can remember raises new questions for scientists. The virus severely damaged her left temporal lobe, where key language functions take place. Why, then, was her extensive vocabulary spared? And how can she so gracefully use word grids, like those found in puzzle books, in her art? Is it another example of implicit learning, or something else?

Cognitive scientists at Johns Hopkins will continue to monitor Johnson’s progress. In the meantime, the wall of Landau’s office in Krieger Hall provides a memory of its own: a highly stylized and meticulously drawn poster/map of downtown Princeton, created by Johnson during the early 1980s. Landau has taken it with her during stints as a student or faculty member at several schools over the past three decades. “Her art was part of the Princeton culture,” Landau recalls. “When I look at it now, I see this particular style. Lonni Sue has lost a lot of memory of herself. What’s amazing is that she still has enough of a sense of who she is to make her art.”

An exhibition, put together in partnership with the Department of Cognitive Science, of Johnson’s “recovery art” hangs at Baltimore’s Walters Art Museum through mid-December. To view more images of her work, go to lonnisuejohnson.wordpress.com.