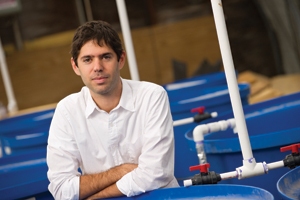 Amid shadowy light made grayish by a greenhouse roof, a convoluted tangle of pipes, plastic water tanks, 18-foot-long vats, and dull silver insulation awaits activation. It could pass for something conceived by Rube Goldberg or Fritz Lang, or a skein of technology that might merit the attention of rural law enforcement authorities. But if all goes well, this vast contraption could serve as a new model for do-it-yourself food raising. Under the auspices of the Bloomberg School of Public Health’s Center for a Livable Future, the greenhouse’s transformation could result in a sustainable synergy of bacteria, fish, and plants—and ultimately hundreds of pounds of tilapia plus a large backyard garden’s worth of collards, herbs, kale, lettuce, tomatoes, and other vegetables. It will also demonstrate to would-be urban farmers how they can grow more than one type of food, all on one site.

“Urban agriculture is becoming a big deal in Baltimore,” says David Love, an assistant scientist at the center and the project’s director. By law, city residents can “raise bees and keep four chickens,” he adds. “We want to develop a way for people to raise fish in the city as well.” If his new “farm” project, situated in a Baltimore park called Cylburn Arboretum, can become both cost-effective and ecologically sound, it will pave the way toward growing healthy food in the strangest of places. Love hopes to be able to show off a working example of aquaponics, a controlled method for growing fish (aquaculture) and plants (hydroponics) that relies upon regularly cleansed and recirculating water, with no antibiotics or chemicals, by early 2012.

Residents in hollowed-out city neighborhoods, where supermarkets and green grocers have disappeared, are more likely these days to search for ways to grow their own fresh food. Interest in fish farming has exploded internationally as some of the world’s largest stocks of ocean fish, including bluefin tuna, have been overharvested. Some nations have turned to fish farming, and not just in the local sense. Many large companies have attempted to generate profit by developing sprawling fish farms. Unfortunately, as research by Love and other Johns Hopkins scientists has shown, many fish and crustaceans raised on farms overseas are laden with antibacterial chemicals designed to keep them from developing infections. Those chemicals end up being ingested by humans. What’s more, studies have found high levels of fertilizer and pesticide residues in farm-raised fish, along with other toxins. “We import about 90 percent of the fish we eat here,” says Love. “But we only test about 1 percent that comes in. One way to know how healthy the fish you’re eating is is to raise it yourself.”

Love’s backstory as an aquaculturalist dates to his high school years in the late 1990s. Growing up along the Lynnhaven River in southeastern Virginia, he designed and ran experiments off the dock of the family house to determine the best depth for growing plump, healthy oysters. Eventually, he and his father, Cliff, became so involved in oyster cultivation that they worked in tandem with the Chesapeake Bay Foundation to raise seed oysters in floating contraptions then help 200 other families raise them on beds in Virginia’s rivers.

But his urban experiment is another animal entirely. Inside the greenhouse, he must monitor water conditions, such as acidity, bacteria, and nitrate levels, so that the 300 fish he will soon raise in four 250-gallon tanks remain healthy. Water laden with bacteria and waste from the fish tanks will be filtered out in a separate tank and used for compost. What’s left of the wastewater will be mixed with new bacteria. That brew then will be used to nurture herbs and vegetables in two 18-foot-long “grow beds” that will float in a small pond.

Even though that all may sound appealingly symbiotic, with the waste of one food system used to feed another, Love still has to figure out how to make the workings of the greenhouse, which is on loan from the city of Baltimore, sustainable. He’ll likely have to contend with urban issues like insects, mice, roaming foxes, and vandals. The size of the project is hardly imposing. Love wanted to make sure it didn’t scare people off so many would follow his lead. “I wanted this to be large enough to be impressive, but small enough that one person could run it,” Love says.

There will be more than enough work for him to do, not to mention a litany of questions he’ll have to deal with on a daily basis: Will energy costs to heat and cool the operation make it too pricey to grow the food? Will the food be raised cheaply enough to make it attractive to growers at home and in neighborhood groups? (The food produced in the Cylburn greenhouse will be donated to local charities.) What kinds of food for the fish can be garnered in a sustainable way?

The Center for a Livable Future is planning tours at the greenhouse for college students, teachers, and researchers. Faculty members and student volunteers will be encouraged to use it as a lab. But even before it was up and running, the greenhouse/farm had already gotten a steady stream of attention. Urban farmers and those who want to be have trekked to Love’s operation. Many express a wish to do what he’s doing. Some offer to volunteer. Some come for an even simpler reason, he says, even though it doesn’t exactly apply to his project: “They want to reconnect with the soil.”