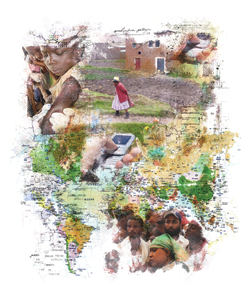 How can developing nations get ahead of disease outbreaks without undergoing an expensive Western-world wiring job? Illustration: Brian Hubble

The gumshoe work of disease tracking, known as epidemiology, has gotten easier in the United States as comprehensive databases have come online and local health agencies have linked via an extensive computer network. Chances are, if a new strain of flu breaks out in California’s San Bernardino Valley, cities around the country will know about it almost at the same time as California state health officials. Poorer countries aren’t so lucky. They usually have little cash to monitor outbreaks electronically, and with only a few health outposts scattered about the hinterlands, they lack the ability to convey information quickly. This dearth of rapidly accessible data has led global health officials and even the U.S. military to ask: How can health professionals in developing nations get ahead of outbreaks of dengue fever, tuberculosis, and other diseases without undergoing an expensive Western-world wiring job?

After nearly five years of rolling out and testing a new software program, scientists at Johns Hopkins’ Applied Physics Laboratory (APL) say they have developed an effective way to perform such low-cost disease sleuthing. Called the Suite for Automated Global Electronic bioSurveillance, or SAGES, the program enables governments in developing countries to tap existing basic communications systems to get the word out about diseases before they become full-fledged epidemics. What’s more, the program is free. The cost to outfit a health agency with the technology is paid for by the U.S. Department of Defense, which has an interest in maintaining the health of its far-flung soldiers. (The U.S. military encouraged APL to develop the program and paid much of the $5 million to do so.)

The emergence of SAGES comes at a time when global worries about contagion are on the rise. Because transportation networks crisscross virtually every part of the globe, connecting more and more people at faster and faster clips, diseases travel across borders much more rapidly than they once did. International security groups and militaries worry that epidemics could destabilize countries, which would have a negative impact on global security. The World Health Organization (WHO), reacting to the 1,100 epidemic events that have occurred globally during the last five years, recently instituted new guidelines that highlight the need for countries, even relatively poor ones, to communicate clearly and quickly about the course of outbreaks.

“The solutions we’re trying to implement are very low-tech,” says Sheri Lewis, the project director at APL who supervised SAGES’ development. Trained as a public health scientist, Lewis has worked alongside biostatisticians, computer engineers, and information technologists at APL to hone the program. “We’re trying to do this on a shoestring and demonstrate the advantages to people on the ground,” Lewis adds. “We know we’ve succeeded when we have a champion in that country who will take the program and run with it. In effect, we set it up and then hope we’ll soon be out of a job.”

The program works like this: A laboratory run by the U.S. military invites the APL crew in. APL then sends a public health scientist to assess which diseases and illnesses a country might want to monitor. An information technology specialist will also make the trip to see what kinds of communications connections can be made, given the tech capacity of the area or country.

While developing the SAGES pilot program in the Philippines’ Cebu City in 2007, APL staff noted that the health agency there used patient logbooks to track health trends. It helped the agency digitize those records so they could be compiled and accessed electronically. The team also discovered that Filipinos are avid users of text messaging. So it tailored an information relay system using social media. “We found that we could use texts effectively and very inexpensively,” says Lewis. “That came in handy each June or July, when dengue becomes a big problem there.”

By constructing a network of texting and data-gathering health professionals, the APL team gave Cebu City and surrounding areas a chance to get ahead of disease outbreaks, Lewis adds. “It’s helped them understand where they need to respond,” she says in regard to dengue, which is spread by mosquitoes. “Once they have the [outbreak] info, they can tell people to make sure there is no standing water in discarded tires [where mosquitoes can breed] or to be on the lookout for symptoms. Local governments might consider spraying the area with pesticides. There’s a lot that can be done with good information.”

Since the pilot project was finished in 2008, SAGES has been adopted by local or regional governments in Cambodia and Peru. Programs will be introduced in Cameroon, Djibouti, and Nicaragua in 2012. Many other countries are asking about the program, Lewis reports. In addition to the information-gathering methods practiced in Cebu City, APL has set up systems whereby health professionals can enter epidemiological data, such as symptoms exhibited by certain patients, on a phone touch pad and then relay that information to other regional health centers or a central ministry of health, where the information is collated and analyzed. In other cases, APL has worked to give agencies the ability to monitor over-the-counter sales of drugs and thermometers—often the first sign of an influenza outbreak.

Countries can use SAGES to meet the WHO guidelines, though there is no requirement to use the program for that purpose. “The biggest concern is getting an early lead on emerging infectious diseases,” says Lewis. “The goal is to move the timeline to the left—to recognize the spread of disease as early as possible, so those countries can do something to stop it.”