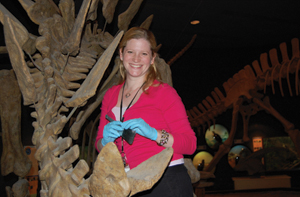 Mollusks. A polar bear claw. Q-tips and paintbrushes for cleaning multimillion-year-old animal skeletons. You never know what you might find on Elspeth Kursh’s desk. As exhibits manager at the Delaware Museum of Natural History, she could be designing an exhibit on space exploration, feeding turtles, or painting the walls in the permanent exhibit halls, depending on the day.

The museum, which was founded by John E. du Pont (yes, those du Ponts), houses more than 2 million mollusk specimens, 118,000 bird specimens and nests, a Hall of Mammals, a giant squid replica, and the state’s only permanent dinosaur display. It’s Kursh’s job to plan and maintain all of these permanent and special exhibits. That’s meant climbing ladders with a special vacuum attached to her back to clean the dust off a Tuojiangosaurus and a Yangchuanosaurus, which are Asian relatives of North America’s Stegosaurus and Allosaurus. It’s meant reattaching a polar bear claw to a taxidermy specimen; gathering mollusks from Delaware, Bermuda, and the South China Sea to be displayed in the Shell Gallery; and tracking down a company to remove the 700-pound pane of glass that covers the Great Barrier Reef, a permanent exhibit, so she can crawl inside and change a burned out lightbulb.

Growing up on a Pennsylvania farm, the natural world “was always presented as way more interesting than anything on television,” Kursh says. For fun, her parents encouraged her to see how many mosquitoes, wasps, and flies she could find on a square foot of their lawn. Kursh remembers being fascinated by the varieties of life she saw through a microscope and through a magnifying glass. “I was always encouraged to be curious and to ask questions and to do research and learn,” she says. “Being aware of my environment was one of those ways to learn more about what was going on around me.” A year after receiving her history degree from Johns Hopkins, Kursh hit a crossroads: She could go to law school or change direction altogether. She chose a change.

To celebrate the museum’s 40th anniversary in May 2012, Kursh will be designing an 800-square-foot exhibit that focuses on the use of collections in research and education. It’s a fitting theme: Researchers travel from around the world just to see the museum’s exhibits. Kursh remembers a man from Canada who came to look at the museum’s collection of birds’ eggs, which is the second largest on the continent. “It seems like we’re a small museum, but we really do play with the big boys,” she says. “That kind of intellectual environment is so rare and it’s such a pleasure to be a part of it.”