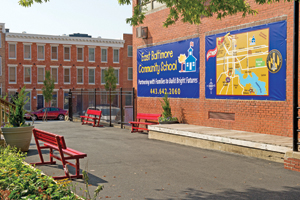 Annette Anderson didn’t like what she saw when she looked around the school grounds. When the Johns Hopkins School of Education assistant dean for community schools first arrived at the East Baltimore Community School in January 2011, she found a building oversaturated with neutral brown. The walls were brown. The floors were brownish. The doors were brown, the doorframes were brown, and all the lightbulbs cast a slightly orange tint, which made everything feel brown. Only beige puts the brain to sleep more quickly.

“I was very explicit to the staff about us un-browning the building and bringing primary colors, pastel colors, colors into the building that would accentuate the instruction that we were planning to deliver,” Anderson says. Adding color was one of many changes Anderson and her staff introduced to improve conditions at the school. Those orangish lightbulbs? Gone. The cracked asphalt leading up to the school? Repaved.

Started in 2009 by the nonprofit East Baltimore Development Inc. (EBDI), the East Baltimore Community School is a contract school operating within the city’s public school system. In August, the Johns Hopkins School of Education assumed operation of the school in partnership with the Morgan State University School of Education and Urban Studies. With a staff of about 30, educating approximately 250 students across grades K–3, 6, and 7, with  grades 4, 5, and 8 to be added as students progress, Anderson is overseeing the transition to university partnership, taking part in everything from curriculum development to hiring staff to, yes, making decor decisions.

Anderson came to East Baltimore following a five-year stint at another university-assisted school in Chester, Pennsylvania, where Widener University partnered with the Chester Upland School District. Her goal for the 2011–2012 Baltimore school year is to instill a sense of rigor in the staff and students. The school has adopted the Success for All (SFA) curriculum developed by Johns Hopkins professors Robert Slavin and Nancy Madden. Anderson sees every aspect of what students experience at the school as playing a role in the school’s whole-child, holistic approach to education. The tweaks around the building, such as the brighter colors and sofas replacing the folding chairs previously found in the front office, are part of a big-picture plan. Anderson says, “Some of these are very simple things that we did, but they have a much broader context if you think about where we’re going.”

The school is one part of the 88-acre EBDI biotech and residential development initiative, in which Johns Hopkins plays a major role. Part of the plan includes a new home for the East Baltimore Community School—a $30 million, 90,000-square-foot facility that will include an early childhood center and community center on a seven-acre campus located within the redevelopment zone, set to open in August 2013. At the Johns Hopkins Carey Business School “Leaders and Legends” lecture series in September, Johns Hopkins President Ronald J. Daniels succinctly outlined the university’s hope in the school effort when he said, “We believe that the school has the power to change a child’s trajectory, a family’s trajectory, and, indeed, the trajectory of an entire neighborhood.”

Says Anderson, “If we can do it in East Baltimore, we can do this anywhere.” She is herself a product of Baltimore’s public education system, a graduate of Western High School. She had parents who demanded that schools do right by their students, and the schools expected the same from parents—the sort of community crucible she wants to foster in East Baltimore. “The thing that I think we undersell about Baltimore City public schools is that [they] really make you scrappy,” she says. “I never felt, because I was a Baltimore public school student, that I was less than this, or I didn’t have that, or I should just accept failure—if anything, it made me fight harder, it made me rely on myself a lot more. Baltimore City will teach you that you can do anything, not just if you have posh conditions. And I tell the children here every day that, yes—you can come out of Baltimore City and do amazing things. It’s up to you to develop that internal fortitude to make that happen.”