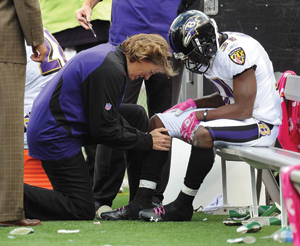 Leigh Ann Curl is the only woman in the NFL to hold the position of head team orthopedic surgeon. Photo: Phil Hoffman

A player slumps on the bench as Leigh Ann Curl applies pressure to his knee. Curl, head team orthopedic surgeon for the Baltimore Ravens, feels for tears or strains, making a diagnosis to determine if the injured player is headed back on the field or if he has an injury serious enough to send him to the locker room for further examination. “You go through the same exams as you would seeing them in the office,” she says. “You’re trying to figure out what the extent of the injury is. If it’s a typical MCL sprain, most players can stay on the field if they’re not that sore. Higher degrees of injury can put a player out for the game and one to three additional weeks. If I diagnose an ACL tear, they’re pretty much out for the game and out for the year.”

Still the only woman in the NFL to hold the position of head team orthopedic surgeon, Curl has been at this for 13 years. After completing both medical school and her residency at Johns Hopkins, she spent five years as head team physician for the University of Maryland. In 1998, she began assisting the Ravens and was named a team physician the following year. A former college athlete herself, the job is a perfect fit, if a little ironic—growing up in Pittsburgh during the 1970s, Curl was a huge Steelers fan.

For Curl, job No. 1 is keeping players healthy and safe, as national attention has turned to player safety. In July, 75 former professional football players sued the NFL over concussion risks associated with the game. Curl says she is especially pleased with the focus on safety in the NFL’s labor deal approved last summer. The league now tracks all injuries and has taken a proactive stance on improving player safety. “But,” she says, “the bottom line is it’s still football, and guys are going to get hurt.”

As for working in the male-dominated field of pro football, Curl says it’s just part of the job. “I’ve never known it any other way. I grew up playing sports and that was always the norm,” Curl says. Before she came to the School of Medicine, she was a standout basketball player at the University of Connecticut. “I played basketball with the guys in high school and even in college, where guys from the Connecticut football team would play pickup games with us.

“When I was in residency and interviewing for a sports medicine fellowship, I did not encounter any other females. Even at Hopkins, there were 32 surgical interns, and I was the only female. I think probably along the way I’ve gotten a little more scrutiny [than male colleagues], but that’s always just been motivation for me. Fundamentally, you just try to be complete enough, and good enough, so that if you are unfairly judged, you stand up to the additional scrutiny.”