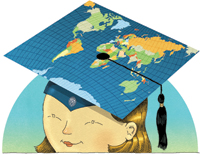 The year was 1915: Woodrow Wilson was in the White House, war was raging across Europe, and William Welch, first dean of the Johns Hopkins School of Medicine, was in China advising leaders of Peking Union Medical College how to make the fledgling institution into “the Hopkins in China.” A few years later, Johns Hopkins graduate Anna D. Wolf, Nurs ’15 (Cert), was serving as Peking Union’s superintendent of nursing and, in 1924, dean of its newly minted nursing school.

Fast-forward to today, and those first tentative ripples in the world of global academia have long since become a rolling wave. The Nitze School of Advanced International Studies has campuses in Nanjing, China, and Bologna, Italy. Peking Union, meanwhile, has for six years been collaborating with Johns Hopkins to create China’s first nursing doctoral program. The Bloomberg School of Public Health has researchers, faculty, students, and alumni tackling health challenges across Africa and around the world. Indeed, every Johns Hopkins school—from the Peabody Institute to the Whiting School of Engineering—has overseas outreach and a globally diverse student body, and the university is today widely recognized as one of the most global of all the world’s institutes of higher education.

“Johns Hopkins really has been international from its very beginning because we had international faculty from the very beginning,” says Pam Cranston, the university’s vice provost for international programs and vice dean for the Carey Business School. “We now have a presence doing so many different things in so many different countries that it’s difficult to come up with the exact number. I’m going to say it’s something like 165.” The university is present around the world in no small part because it has to be: The challenges and opportunities of the 21st century are global in nature, ranging from pandemic disease to a worldwide shortage of clean water to complex international economic alliances. Only by working cooperatively across national borders can universities hope to provide the answers the world needs.

Because of this, Johns Hopkins is hardly alone in blazing academic trails across borders. Increasingly, universities are viewed as instrumental to economic growth, and the higher education marketplace is rapidly globalizing as a result. More and more American universities are branching out abroad, especially in economically surging nations in the Far and Middle East, which are expanding their educational infrastructures at a rapid clip. Saudi Arabia, for instance, has allocated 12 percent of its national budget for higher education and has cut ribbons on a brace of brand new campuses. Other countries ranging from China to Singapore to Dubai are embarking upon their own ambitious plans.

“There is a sort of peer pressure to be doing this, and many schools around the world are developing relationships,” says Nick Jones, dean of the Whiting School of Engineering. “We are peppered with requests to form partnerships and hardly a day goes by when we don’t get invited to join some new venture, especially in biomedical engineering.” So, how should an already global Johns Hopkins best approach this new mad rush to international cooperation? Two words, says Jones: “carefully and strategically.” Which implies, of course, the need for some serious thought and sustained discussion. An opening foray into the matter occurred at the Johns Hopkins Volunteer Summit held in October 2010. At that event, more than 60 Johns Hopkins leaders, faculty, students, and alumni—including participants who had flown in from London and Guyana—used the occasion to begin mapping a path through the minefield of higher education globalization, where already several universities have had to beat hasty retreats. In the realm of overseas campuses in particular, universities ranging from Michigan State to George Mason have initiated programs with great fanfare only to later abandon those efforts.

One lesson learned from the experiences of others in global higher education is that it is less important to do it first and much more important to do it right. It is deliberation, not speed, that is of the essence, in part because the playing field is so large and the opportunities so varied, says Cranston, a summit participant. “There is one line of thought that this is a zero-sum game, where the gain of others is your loss, but I’m not in that camp,” she says. “I think there is plenty of room for more great universities in the world. How prominent and desirable the U.S. style of higher education remains is shown by the number of countries around the world that are trying to emulate it. Johns Hopkins is in a very strong position.”

Summit participants concluded that any examination of a university’s global outreach has to be filtered through the notion that quality trumps quantity. But gauging a project’s worth is a complex issue. “Success is not simply generating a positive return on investment,” says Terri McBride, SAIS ’87, who came to the summit from London, where she works for an international management consulting firm. Rather, she notes, it is a combination of many complex factors: “It’s positive and tangible engagement with the local community, it’s student and faculty enrichment, and it’s the opportunity to further research and develop thought leadership, to name but a few.”

That said, the financial aspects of a given international project have to be very carefully considered, and must remain of pre-eminent importance, no matter how desirable the venture may appear. “Sustainability is essential,” says Ruben del Prado, SPH ’87 (MA), who came to the summit from Guyana, where he’s country coordinator for the Joint United Nations Program on HIV/AIDS. “Nothing should be established based on resources that do not exist or cannot be reliably predicted,” del Prado says. A further stumbling block requiring careful attention is potential conflict over cultural and political values, such as censorship and the role of women. University policies on these issues do not change according to local customs, says Cranston. “It’s important that across the board we are allowed to operate wherever around the world according to our own institutional values and guidelines,” she says. “We don’t go anywhere where we cannot have an agreement or an understanding with that country or that institution that we have to be able to operate there exactly like we would at home.”

Ultimately, the move toward a more global university is not about what the world can bring to Johns Hopkins but, rather, what Johns Hopkins has to offer the world. “We do this because we’re a leader,” says Jones, “and we want to share the advances we’re making with people all over the world.”