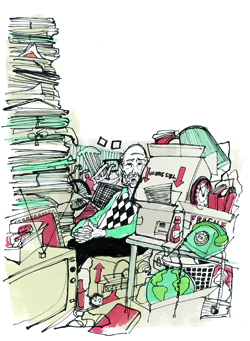 Jack Samuels’ mostly anonymous days as a research psychiatrist ended sometime in the last couple of years, as the subjects of his studies—people who accumulate mounds of things, often to the detriment of their health and relationships—stepped out of their overstuffed closets and into the spotlight. Once dismissed as junk-loving eccentrics and flakes, people who hoard indiscriminately have recently served as subjects not only for sober scientific study but for three so-called reality TV shows and a celebrated novel, E.L. Doctorow’s Homer and Langley, based on the real-life story of two wealthy brothers who were found dead in their New York home in 1947 amid more than 100 tons of useless items they had piled up over decades.

Nowadays, Samuels, an associate professor of psychiatry at the School of Medicine, spends less quiet time in his tiny, semi-cluttered office with a view of a sliver of the Baltimore harbor and a lot more of it talking with the media. With 23 years of research on the subject—all of it performed at Johns Hopkins—he has also become the authority for scientists looking to unravel the mysteries of hoarding. Samuels and several Johns Hopkins colleagues’ groundbreaking research into a sometimes-related ailment, obsessive-compulsive disorder, recently found a genetic basis for hoarding behavior. The discovery comes at a time not only when people who hoard are in the public eye but as longstanding misconceptions about the disorder are being dismissed by the psychiatric world. “Even just a couple of decades ago, we thought that hoarding was merely a subtype of obsessive-compulsive disorder,” says Samuels, a compact man with a mustache and a clear, media-friendly speaking style. “Now, we know that only one-third of people with OCD exhibit hoarding behavior, that many people without OCD hoard, and we suspect that genes can play a key role in it.”

Hoarding, which afflicts an estimated 15 million people in the United States, can endanger families and even neighbors, he adds. Every year, stories abound of people dying in fires stoked by hillocks of things piled within their homes. Those sad tales can border on the incomprehensible: Would-be rescuers often cannot find people in a burning home stacked floor to ceiling with newspapers and other items. Some people who hoard make animals their obsession, sometimes collecting dozens of them. The animals, often malnourished and kept in appalling conditions, can spread disease throughout neighborhoods.

“It’s not uncommon for us to see people who fill one house up with stuff, then move to a second house—sometimes even a third—to get away from this mass of clutter,” says Samuels.

Even though we live in a society where the number of self-storage facilities (51,000) dwarfs that of coffee shops (around 25,000), and where one in 10 households stows excess stuff in places outside their homes, Samuels and colleagues think that the disorder has a lot more to do with activity in the genes—specifically, in chromosome 14—than with Americans’ passion for material things. (Researchers around the world have identified hoarding in all cultures.) Since 2008, his Johns Hopkins research team has interviewed 70 people found through hoarding support organizations—groups with such names as Clutterers Anonymous, Children of Hoarders, and Messies Anonymous—as well as 100 of the participants’ relatives. “We’re finding that a lot of people who hoard have relatives who show the same behavior,” Samuels says. Older people are more prone to exhibiting symptoms of the disorder. “[Hoarding] tends to show up later in life than OCD does,” he says. “The tendency is there when people who hoard are young, but they may live with someone who can help them manage things.” But as people get older, they may lose a spouse and become isolated. “The situation can get out of hand.”

Raising children or maintaining relationships is more difficult for hoarders. Getting them help isn’t easy, either. Although many hoarders are too embarrassed by their surroundings to invite people over (and, hence, become even more isolated), others deny they have a problem, even as their relationships crumble. “There’s often a lack of insight,” Samuels says. Traditional treatments for OCD aren’t much use against hoarding. Prescribing anti-anxiety drugs and behavioral therapy that exposes people to objects they fear—methods used to battle OCD—are less effective in treating hoarding. One emerging cognitive behavioral approach involves sending a therapist to a patient’s home to challenge his thinking about hoarding objects, as the patient works to reduce clutter. The technique, tested in trials, has reduced the severity of the disorder by 30 percent. But such treatments often aren’t covered by patients’ health insurance plans, even though therapy, which can cost up to $7,000 for 40 hours, must be maintained for years. “It’s not like these people are cured,” says Samuels.

As science continues to examine people who hoard and their genetics for clues as to how to help them, Samuels hopes that more mental health professionals will educate themselves about the disorder and take on more of them as patients. In Baltimore, there are only three or four therapists who treat the tens of thousands of people estimated to have the disorder there—numbers that reflect a nationwide trend, he says.

Samuels believes that the sagas of those who amass piles of often useless bric-a-brac have entered the cultural zeitgeist because we all grapple with the hold material things can have on us: “It’s a disorder we can all relate to in some way. We either know of people who hoard things, or we can identify with their difficulty in getting rid of them. Throwing out our kid’s second-grade artwork is hard for us, but most of us can do it.”