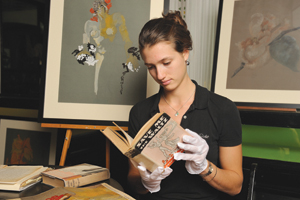 Laura Somenzi wanted to present Zelda Fitzgerald as an artist in her own right. Photo: Will Kirk

When Laura Somenzi came to Johns Hopkins University in fall 2009, she had no idea she was going to continue the university’s impromptu relationship with one of the 20th century’s most infamous celebrity couples. The history of art major from Colorado had never seen the visual art created by the wife in that couple. All she knew was that as the recipient of a Woodrow Wilson Undergraduate Research Fellowship, she would have the opportunity to conduct humanities research that would lead to an exhibition of some sort. The results of her two years of work can be seen in Zelda Fitzgerald: Choreography in Color at Evergreen Museum & Library.

“I really wanted to present Zelda as an independent, artistic entity,” Somenzi says of the exhibition. “I wanted to show how she approached artwork on a theoretical level and also how she was able to use art to create an independent identity for herself, distinct from her husband. She was a dancer, she was a painter, she was a writer, [and] how she used art was a distinct way to redefine herself continuously.”

Her husband, novelist F. Scott Fitzgerald, became a defining Jazz Age figure thanks to 1920’s This Side of Paradise and 1925’s The Great Gatsby. But Zelda’s life and identity were intimately wrapped up in his fame. “One of the paradoxes about her glamorous role as a flapper is that it gave her a freedom and a lot of liberty just to be herself,” Somenzi says. “The flapper was sexually liberated, but at the same time it was only a means to get married. So once she’s married, it’s over, and she becomes Scott’s wife. But she’s also a writer, so there’s an artistic competition, and she had to find her own identity and reappropriate herself.”

Youth, beauty, talent, fame, scandal, alcoholism, falls from grace, madness, early deaths at 44 (him) and 47 (her)—if there is a celebrity couple more definitive of 20th-century America than F. Scott and Zelda Fitzgerald, tabloid journalists and culture critics have yet to find them. Zelda’s fame, however, has only recently been examined on the merits of her own output. Nancy Milford’s best-seller Zelda: A Biography kick-started a re-examination of Fitzgerald’s creative output following its 1970 publication. And it was around that time that Evergreen House acquired seven of Fitzgerald’s drawings, six of which hang in Somenzi’s exhibition.

Those pieces were found in the Bolton Hill home of C. Sewell Weech, A&S ’15, in the late 1930s. Weech and his wife moved into 1307 Park Avenue and found items left by its previous residents: the Fitzgeralds and their daughter, Scottie. “They found 10 drawings rolled up in a cupboard,” says Heather Stalfort, Evergreen’s communications and marketing manager, who has researched the artwork’s provenance. “They also found some piano music with Zelda’s name on it. And they found some clothing that must’ve been from their daughter, Scottie. They gave the clothing away and I think the wife played some of the piano music for a while, but they hung onto these drawings, didn’t know what to do with them.”

The Weeches kept the drawings for nearly four decades until they happened to meet John Irwin, a professor at the Krieger School of Arts and Sciences. Irwin, who says he has taught F. Scott Fitzgerald roughly once a year for the past 40 years and is currently working on a book about the Fitzgeralds, met Weech through the Church Warden’s Chess Club, which met one Saturday a month at the Johns Hopkins Club for dinner and matches. “He had served in the Norton-Harjes Ambulance Corps that went to France and Italy aiding the Allies with an ambulance corps before the U.S. had entered [World War I],” Irwin says of Weech. “We got to be friends, and he found out that I was interested in Scott and Zelda Fitzgerald.” Through the English department and Irwin’s efforts, seven of the drawings were donated to Evergreen in 1974; one figurative work hangs in Irwin’s Gilman Hall office.

Fitzgerald’s initial brush with Johns Hopkins came when she was treated at the Phipps Psychiatric Clinic of Johns Hopkins Hospital. She would stay at the clinic for only a few months in 1932, but it’s there that she finished her only novel, Save Me the Waltz, which provided Somenzi with a thematic window into Fitzgerald’s creative world. The novel is “very much concentrated on the world of women—women and their bodies, and dancers,” Somenzi says. “This plays out again in her artwork, which is concentrated on the body and corporeality and being a dancer. She approaches artwork like a choreography of color because it is very much attached to the idea of dancing. When she painted a ballerina, she has this fairly known quote, which is, ‘I painted her large because that’s how she feels, not the way she looks.’ So it is very much about that connection [to the body].”

Fitzgerald’s artwork was exhibited in Baltimore and eventually in New York, at the Cary Ross Gallery in 1934. But interest fell off after her 1948 death. The artwork didn’t garner much acclaim until Eleanor Lanahan, Fitzgerald’s granddaughter, organized an exhibition of artwork in 1995 that became a traveling show, which visited Evergreen Museum in 1996. Somenzi’s Choreography in Color isn’t a revisit of that show, as the undergraduate’s exhibition focuses on an aesthetic theme running through Fitzgerald’s art and writing. Besides, Somenzi was able to add something to the growing body of Fitzgeraldiana: a Baltimore-made documentary about the Fitzgeralds. One of Somenzi’s roommates is a family friend of Laura Templeton, who works in Johns Hopkins’ student financial services. Templeton’s grandfather, Gwinn Owens, had known Scottie Fitzgerald, and in the 1950s he made a documentary, titled Marked for Glory, about the Fitzgeralds for Baltimore’s CBS affiliate WJZ-TV, which aired once in 1963 and hasn’t been seen much since. The family passed Somenzi a copy, now part of her exhibition.