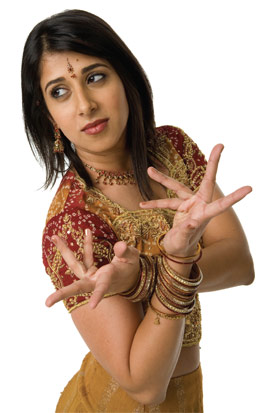 Some of us might sing a little when we’re happy. But how about throwing in a heavy drum beat and a hundred or so backup dancers? For a few days last year, such was happiness for Sapna Rohra after she won an online dance contest that swept her away to India to perform in an upcoming Bollywood film.

Often running three hours or longer, Bollywood films are filled with star-crossed lovers and melodramatic plots. The musical scenes are marked by dramatic locations, bright costumes, and, of course, a lot of dancing. Imagine Shakespeare edited by Busby Berkeley.

Rohra was born in Lubbock, Texas, but her parents are natives of India, so she grew up with traditional dance. However, it wasn’t until she came to Johns Hopkins–where she danced with JHU JOSH (Indian, jazz, hip-hop, and ballet) and JHU RAGE (Western Indian folk dance)–that she studied the Bollywood style in depth. “Growing up in a somewhat small town, I wasn’t nearly immersed in Indian culture as much as when I got to college and joined the dance teams,” she says. After earning a degree in electrical engineering, Rohra moved to Los Angeles, where she trained to be a professional hip-hop dancer.

Then she found out about the contest, sponsored by Verizon and Bollypop, an online newsletter about the Hindi film industry. Dancers were tasked to choreograph and perform a dance, then upload a video to the Web site. Rohra and her dance partner, Shivani Thakkar, pulled together their winning entry in just 24 hours, filming it at sunrise on the roof of Thakkar’s apartment building. (See the video at www.saavn.com/bollypop.) A few weeks later, the pair was off to Mumbai, where they spent several days in rehearsals before filming two dance sequences.

It was an inspirational experience. “I’ve always visited [India], but I never realized I would love it until I went as a professional dancer,” says Rohra, who has since started a Los Angeles – based dance company, Karmagraphy, that teaches and performs Bollywood, traditional Indian, hip-hop, and contemporary. “I was around my culture, around my family. And I was dancing hip-hop in a Bollywood film, both of which I love.”