Bringing science to the teaching of arts in schools
August 27, 2009 |  by Michael Anft 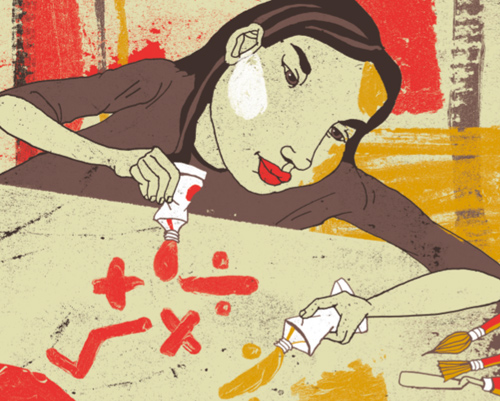 For years, educators have intuited that teaching the arts helps children learn. They’ve pointed to evidence, much of it anecdotal, that hands-on arts learning helps students’ overall performance by giving them an additional chance to demonstrate a talent—important in building the confidence of kids who are behind their classmates in reading or math. They’ve maintained that children who also play in orchestras and school bands, or perform on stage, more readily learn about teamwork, while drawing and painting can acquaint them with ideals of beauty and truth that regular classes can’t.

Now, science fueled by a growing movement in so-called neuro-education— a movement with a root or two at Johns Hopkins—is showing they might be right. New research indicates that engaging children in the arts stimulates regions of the brain that involve all types of learning. “There’s emerging evidence that shows that studying the arts improves children’s attention levels, which may lead them to perform better in school overall,” says Mariale Hardiman, assistant dean at the School of Education and co-director of the Neuro-Education Initiative, a program formed last year to pull in researchers from across Johns Hopkins to study how the brain works during learning. “How that happens, we don’t know exactly. But that’s what makes this exciting. There’s a lot of research to do.”

The Neuro-Education Initiative was founded by Hardiman and Susan Magsamen, an instructor in the School of Education. It includes Hopkins researchers from six divisions plus the Brain Science Institute and the Hopkinsaffiliated Kennedy Krieger Institute. With support from the initiative and outside sources, scientists are ramping up new investigations to peer into the brain, using the arts as a stimulus. For example, Barry Gordon, a professor of neurology and cognitive science at the School of Medicine, is designing a study that will investigate how the brain creates aspects of insight. Another study in the pipeline will, if financed, look into how study of the arts affects the brain. Charles Limb, associate professor of otology at the School of Medicine— who conducted well-publicized research on the brain and jazz improvisation—is putting together a study on how musicians develop the improvisational skills of rap.

Besides organizing monthly meetings of researchers who want to investigate how the learning brain works, the Neuro-Education Initiative has brought together thinkers nationwide. In May, the initiative played a pivotal role in organizing a conference in Baltimore attended by more than 300 federal and state education bureaucrats, representatives from children’s museums, teachers, and university researchers. Speakers unveiled research showing that children who study the arts improve their ability to learn a variety of subjects. In recent years, scientists have found that young people who study music, for example, are more likely to understand geometry, while training in acting translates into betterfunctioning memory.

Hardiman says now is the time for creating more science to push the nascent but burgeoning field forward. Arts education in public schools has slowly been whittled away since the 1980s due to local and state budget crunches. The process accelerated during the past few years, as the federal government began implementing No Child Left Behind programs in 2003. Those programs focused on more testing of core subjects—the three Rs—at the expense of other courses. “There’s been an overall narrowing of the curriculum that goes back quite a few years and has gotten worse recently,” says Hardiman, who says other types of courses, including social studies, have been slashed to accommodate federal dictates. “What we’re seeing now is a push back against No Child Left Behind, which has led to very modest gains in achievement, if any.” With so many kids becoming disenchanted with school, educators worry that schools may be missing an opportunity to use the arts to improve students’ ability to learn and perhaps keep them in the classroom.

“The challenge now is to show that these improvements in school performance are more than correlative,” says Hardiman. “We know that the arts keep kids’ attention. But it’s possible that other subjects or activities might do that, too.” Another area for research, she says, is whether using the arts to teach core academic subjects, such as math, would be beneficial to students. Politics, which always has a major impact on education policies, may be turning in favor of such investigations. “The Obama administration is very interested in arts education,” Hardiman says. “It looks like we’re gaining a good bit of traction.”

When published, this story incorrectly identified one of the co-founders of the Neuro-Education Initiative at the School of Education. Co-founders of the program are Susan Magsamen and Mariale Hardiman. Johns Hopkins Magazine regrets the error.