The procession up the stone stairs of the United States Patent and Trademark Office’s headquarters building in Alexandria, Virginia, was steady and sure, owing as much to accomplishment as to age. At the front was Zalman Shapiro, age 89, who had come for a ceremony to formally award him his 15th U.S. patent (No. 7,547,358: “System and method for diamond deposition using a liquid-solvent carbontransfer mechanism”). 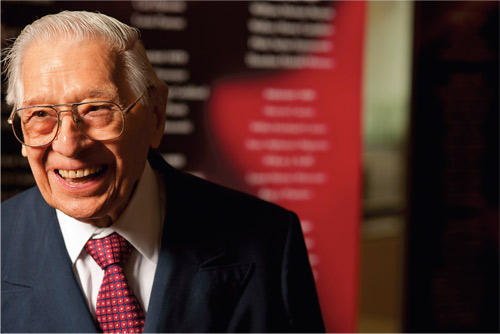 Zalman Shapiro - "21st-century pioneer" - at the U.S. Patent and Trade Office for the official ceremony awarding him Patent No. 7,547,358.

As Shapiro, his wife, Evelyn, two of their three children, and other family and friends gathered in the soaring atrium of the Patent Office’s Madison Building, the event marked the latest milestone in a life focused on research, science, and discovery. Though Shapiro spent his career working with nuclear power, his latest patent–which involves a new method of synthesizing gem-quality diamonds–provides a bookend to his early days as an undergraduate at Johns Hopkins. At Homewood, Shapiro worked on a research project to determine the chemical causes of gun barrel erosion. His professor, who attempted to synthesize diamonds repeatedly and failed, introduced Shapiro to the possibility of creating new materials. After more than 67 years of keeping the problem in the back of his mind, Shapiro finally hit upon a solution.

Born in Canton, Ohio, in 1920, Shapiro relocated to New Jersey as a child and was valedictorian of Passaic High School’s class of 1938. When college application time approached, he set his sights on one target. “I had a cousin at the Johns Hopkins School of Medicine and he raved about the place,” he says. “Hopkins was the only school to which I applied.”

After graduating Phi Beta Kappa and earning a PhD in chemistry, he turned down an offer to teach at Yale University for a more lucrative position at Westinghouse. In early 1949, Shapiro and five other scientists began secret work on early nuclear power plants for the U.S. Navy, overseen by Admiral Hyman Rickover.

The project moved to an old airfield, at what is now the Bettis Atomic Power Laboratory. The six men worked in empty aircraft hangars, keeping their coats and gloves on in the winter to stay warm as they designed the first prototype submarine nuclear power plant. Shapiro’s contribution was in the development of the process and equipment for the large-scale production of nuclear fuels. His work at Bettis drew praise from Rickover, who credited Shapiro as being one of four men most responsible for the success of the first nuclear-powered submarine, the USS Nautilus.

In 1957, Shapiro left Westinghouse and created his own company, called NUMEC (Nuclear Materials and Equipment Corporation), outside Pittsburgh. That company’s work would lead to the only hiccup in his illustrious career: In the late 1970s, there was a federal investigation into what appeared to be excessive processing losses of nuclear material at NUMEC’s Apollo, Pennsylvania, plant and questions arose of possible diversion of material to Israel. But after members of Congress and three government agencies–the Atomic Energy Commission, the CIA, and the FBI–investigated, Shapiro was cleared of all wrongdoing, and he continued his research. (The material was later found in the ventilation ducts and in other areas when the plant was decommissioned and dismantled.)

In his sixth and seventh decades, he sponsored and funded a variety of philanthropic endeavors, both around Pittsburgh and nationally. In 2002, he was given the Johns Hopkins Distinguished Alumnus Award. Those career milestones led him, however circuitously, to the Virginia headquarters of the Patent Office. After a meeting with acting Undersecretary of Commerce for Intellectual Property John Doll, a small ceremony attended by more than 20 people was held in the Patent Office’s Museum. Surrounded by images of inventors like Philo Farnsworth (television), Jack Kilby (microchip), and Elisha Otis (elevator brakes), Doll read aloud the description of Shapiro’s patent, saying, “It’s guys like you who are the pioneers of the 21st century.”

“Not bad for age 89,” a smiling Shapiro said later.

Geoff Brown is a graduate of Zanvyl Krieger School of Arts and Sciences, 1991