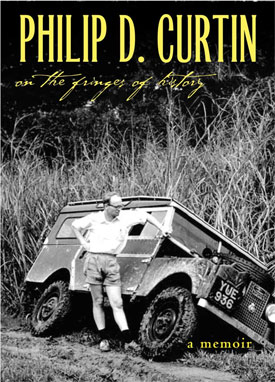 The mind of historian Philip DeArmond Curtin ranged widely and thrived on interaction—the interaction of cultures and the interaction of academic disciplines. His study of tropical history involved tropical climatology. His study of the African slave trade included quantitative analysis. An article by him might encompass not just archival research but epidemiology, cliometrics, or biology. He wrote about African governments creating their first national archives in the 1960s, the centuries-old chimera of gold to be mined in the Bambuhu region of West Africa, the effects of British sugar du-ties on prosperity in the West Indies, tropical Africa as “the white man’s grave,” and the role of nutrition in African history. He was best known for studying the number of people abducted from Africa by the slave trade and his startling conclusion that the accepted and oft-repeated tabulation was way off.

Curtin died in June at age 87, from pneumonia. He taught history at Johns Hopkins from 1975 to his retirement in 1998. He was a star—winner of a MacArthur fellowship in 1983, president of the American Historical Association in the same year, author of 19 books and uncounted articles—but colleagues and students who wrote about him after his passing recalled that he did not comport himself like a star. They remembered him as modest, amiable, creative, incisive, and insistent on rigor from his students and himself.

Those who know only a little about him typically know about his 1969 book, The Atlantic Slave Trade: A Census, which detailed his research into the number of Africans exported to the New World by slavers of all nationalities. The numbers most often cited as fact before Curtin’s research ranged from 15 million to 20 million. He scrutinized shipping contracts and port data, applied modern quantitative analysis, which no one had done before, and arrived at an estimate of only 9 million to 10 million. The previous higher estimates, he wrote, had endured because of “a vast inertia, as historians have copied over and over again the flimsy results of insubstantial guesswork.” You would be hard-pressed to find a more cogent damning of bad scholarship than those last six words.

Curtin grew up in West Virginia, sailed with the Merchant Marine during the Second World War, was educated at Swarthmore and Harvard, and first made his mark as a scholar at the University of Wisconsin–Madison, where he teamed with Jan Vansina to create the nation’s first department of African languages and literature. Up to that time, Western historians had regarded Africa mostly from the perspective of how it figured in the history of Europe and the New World. Curtin thought the continent deserved its own context. His longtime colleague, Johns Hopkins history professor William T. Rowe, says, “He envisioned world history as a complex, deeply interrelated process in which every culture, or society, no matter how seemingly peripheral, should be treated by the historian with equal dignity and gravity. He was enthralled with cross-cultural and cross-temporal comparisons, and analyses of mutual influences.”

Curtin’s was a capacious intellect, and his legacy is the discipline of history made richer by it.