Soon after Taylor Hanex started playing the family’s Baldwin piano, it became clear that she had the talent, fortitude, and mind to become a professional musician. Those gifts (and her parents’ dedication) carried the pre-teen to the Peabody Preparatory, and later, to receive her bachelor’s from the Peabody Conservatory in 1975 and her master’s in piano performance in 1978.

But how that artistic career took a detour and led Hanex to her current professional setting is a good example of adaptation and flexibility–skills also familiar to musicians. “At Peabody, I always enjoyed playing Beethoven, Chopin, and Liszt,” says Hanex, who was recently elected to the Johns Hopkins University Board of Trustees. “Beethoven for the structure, discipline, and passion; Chopin and Liszt for the improvisational spontaneity, endurance, and the sheer fun and freedom of those knuckle-busting octaves!” (Hanex is the first Peabody alumna to be elected to the board as a full trustee. Christopher Kovalchick, Engr and Peab ’06, was elected during his senior year to serve a four-year term as a young trustee on the board.) 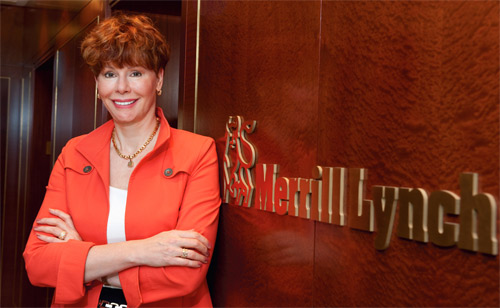 Taylor Hanex, a new member of the board of trustees

The mix of structure and spontaneity Hanex brought to her music serves her well today as vice president in global wealth management at Merrill Lynch’s Fifth Avenue offices in Manhattan. “My goal was to become a college professor,” she explains of her transition from music to finance. “I love to teach. It’s one of the most noble professions. But when I graduated, music jobs were so hard to find and so hard to get. I decided I had to switch gears.”

Fortunately, Hanex had a second talent–picking stocks. “I’d always been fascinated by the stock market,” she says. “I’d always been interested in financial security and planning ahead, and I was always talking to friends and relatives about financial strategies.” When she realized that working with clients could be a lot like teaching, she headed to Fordham University, where she received her MBA in 1981, and has been with Merrill Lynch since 1987.

Hanex has been a big supporter of Peabody and Johns Hopkins throughout her career, and her election to the Board of Trustees is a responsibility she sees as an opportunity. “Music is a collaboration between the performers and the audience,” she says. “I believe my musical background has given me the ability to communicate and listen in a spontaneous yet collaborative way. I hope these skills will enable me to work with people and situations creatively to help Peabody and the entire university.”

Hanex has never put aside her love of music, and she credits her parents, John and Eileen, with making that ongoing relationship possible. “My mother had heard of Peabody, so she wrote them a letter,” Hanex recalls. “I was accepted to Peabody Prep, and for the next five years, my father drove me to Baltimore every Saturday and waited in the city all day for me while I attended class.

“My father died when I was 19 and a junior at Peabody,” she continues. “The director of Peabody at the time, Richard Franko Goldman, and the dean, Tinka Knopf, made sure I got some financial aid to carry me through to graduation.” To return that act of kindness, in 1991 she established the John J. Hanex Memorial Scholarship at Peabody, which supports conservatory students with a deceased parent. Her mother lives in Connecticut, and “when she heard I had been elected a trustee of JHU, her first words were, ‘Your father would be so proud. I am sure he is smiling.'”

Geoff Brown is a graduate of Zanvyl Krieger School of Arts and Sciences, 1991