Maria Portuondo’s snug office just off the Homewood campus is hardly a museum. But despite all of the usual modern contrivances, you wouldn’t call it forwardlooking, either. Past the innards of a 1990s IBM circuit board—a relic of Portuondo’s past career as a designer of semiconductors— you’ll see a horologium nocturnum, an ornately inscribed disk from the 15th century that allowed its users to tell time at night by calibrating the position of the North Star. Other remnants of industry, including some weavers’ shuttles, vie for shelf space with quaint replicas of centuries-old maps. On a July day, even the wall calendar, folded open to May, hearkens back.

Portuondo’s collection includes another morsel of scientific history that has commanded her scholarly attention, despite its simple design and plain facade. Made from little more than a couple of boards, a foot-long length of twine, and some drawn circles and lines, the device is an exact recreation of a tool that cosmographers used 400 years ago to solve a scientific puzzle that vexed the Spanish empire and other colonial powers: how to accurately determine degrees of longitude.

Disputes between the empires of Europe over remote pieces of turf drove the Spanish to seek information that would lead to better maps—maps that would, Spain’s King Philip II hoped, protect his nation’s claims against the designs of rival powers. Astrolabes, used by seafarers to measure the angle of the North Star above the horizon, were fine for figuring out latitude. But longitude posed a knottier problem because to determine it required accurate timepieces, which did not exist in the early modern era. “If you could find an accurate way to measure local times, and then compare them, then you could understand longitude,” says Portuondo, A&S ’05 (PhD), assistant professor of the history of science and technology in the Krieger School of Arts and Sciences. 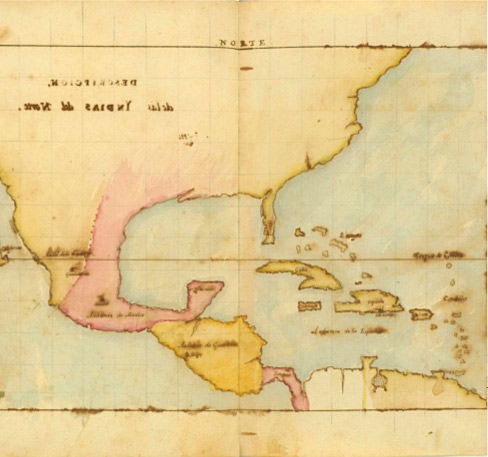 To improve maps of the New World, like this one created by Juan Lopez de Velasco, the Spanish needed to determine longitude. (John Carter Brown Library, Brown University)

Portuondo first heard of a possible solution while taking a Hopkins graduate course in Spanish history a few years ago. Following her longtime interest in the scientific past, she began to unearth documents about a contrivance that King Philip’s court dubbed El Instrumento de Indias, the Instrument of the Indies. Scientists understood that each hour in time variation is equal to 15 degrees of the Earth’s circumference. Spanish astronomers, led by Juan Lopez de Velasco, then the head of cosmography for the king’s Council of Indies, thought that a lunar eclipse, observable across half a hemisphere, might allow astronomers to more accurately gauge local time. With information gleaned by observing eclipses from across the Spanish empire, including Mexico, Peru, the Philippines, and Puerto Rico, they could conceivably convert the time differences into degrees of longitude.

But travel was expensive and astronomers were few, meaning opportunities to gather such information were rare. So in 1577, in a scenario Portuondo describes in her new book, Secret Science: Spanish Cosmography and the New World (University of Chicago Press, 2009), Velasco and the Council of Indies came up with the idea of sending instructions for making El Instrumento, along with paper and directions for recording lunar events, to Spain’s far-ranging Western colonies. Velasco would rely on people who had at least a bit of formal schooling and who could follow his instructions.

Observers were asked to build a level platform with a sundial to determine their latitude and the east-west meridian. That meridian served to calibrate the precise placement of El Instrumento. During a lunar eclipse, observers in Spain and several of its outposts used the instrument to mark the shadow cast by the moon at the beginning and end of the eclipse. They copied those marks to papers, had the papers notarized, then sent them back to the Council of Indies in Madrid, where astronomers boiled down the information. “By comparing observations taken in Spain with those reported from the Indies, it would then be possible, although not easy, to calculate the longitudinal distance between the two locations,” says Portuondo. She concluded that the importance of El Instrumento to the West’s technological past has been obscured, in part, by Philip’s insistence on treating the information as a state secret. By teaching non-scientists how to build and use the instrument in far-flung points of the globe, Spanish cosmographers advanced the cause of mapmaking throughout Europe. “It worked for them. They found nearly true values for longitude. Cartographers from the crown used many of these findings, at least a couple dozen of them, to draw up new maps.”

Velasco and company’s computations resulted in recording some longitudinal readings that were a tad off the mark. Portuondo decided she should, as any dutiful scientist would, verify the process by attempting to replicate it. She holed up in her basement and converted an old shelf into El Instrumento. During a midnight eclipse a few years ago, she asked her neighbors just north of campus to turn off their lights. One of them came out to witness both the heavens and Portuondo’s work recording their movements. They drank sherry, waited, and watched. She made her marks. When the sherry was done, they went inside. “We used the instrument in Baltimore and factored in the longitude of Madrid and found nearly true values for longitude,” Portuondo says. She’s ready to turn the clock back again later this year. The next eclipse is December 21, and she’d like to involve more than a neighbor and a bottle of wine: “It would be wonderful if we could get people in Spain and elsewhere involved with this.”