Matters of Intent
The Roman philosopher Seneca said that the true gift in giving is not found in a gift but in the giver’s intention. At Johns Hopkins, there are nearly as many reasons for giving as there are donors (83,396 of them last year, to be exact, including 20,040 alumni). This month, we delve into some of those donors’ intentions–a young alum saying “thanks” on behalf of her entire class; a couple with deep roots at the School of Medicine taking a stand to ensure that the school and hospital work in tandem to advance research, teaching, and patient care; and a retired businessman wanting to share with today’s students the same tools that brought him success 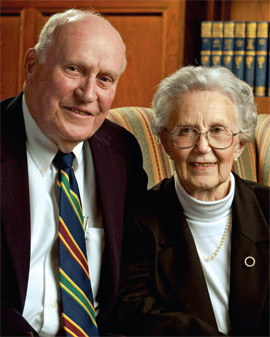 William and Katherine Ginder have contributed $1 million to the Carey Business School.

Back from the war in 1946, Bill Ginder, Bus ’54, spent his days lifting tinplate for the American Can Company and his nights studying for a bachelor’s degree in business at Johns Hopkins. The schedule was challenging, but those night school classes led to success during the day–and a stellar 40-year career.

“Because we were in school at night, we were taught by people who also actually worked in the field,” Ginder says. “So while I was working during the day, I could match the theory with the practice, which gave me a great foundation for a career.”

A few years into the eight he would spend completing his degree and taking extra accounting classes, Ginder left the can company for Crown Central Petroleum Corporation, a Baltimore-based producer of petrochemicals and petroleum products. There, he worked his way up from property accounting clerk to president and vice chairman, retiring in 1986.

“Johns Hopkins gave me the skills I needed, and luckily, I was able to apply what I learned in my career and, consequently, to afford to give a few dollars every year,” says Ginder, who, along with his wife, Katherine, has made consistent annual gifts to the university and hospital since 1979.

After contributing to the annual fund for many years, Ginder thought back to his days of classroom learning from working professionals and created a program that would do the same for today’s business students. Established in 1989, the annual William M. and Katherine B. Ginder Lecture Fund has featured speakers including Paul S. Sarbanes, former U.S. senator; Kevin A. Plank, founder and president of Under Armour; and, most recently, Jean-Paul Agon, president and chief executive officer of L’Oreal.

The couple recently bolstered their support to total $1 million, also establishing a visiting professorship program that brings faculty from prestigious institutions around the world to the Carey Business School to teach and work with faculty.

“Mentors helped me over my career, starting at Johns Hopkins, and I have always, since childhood, read about people, particularly people in business and finance, for inspiration,” Ginder says. “I thought it would be useful for students to hear from role models so they can see the kinds of opportunities available to them.”